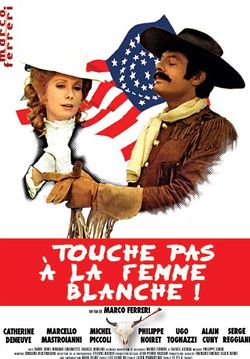 General Custer (Marcello Mastroianni) is delegated to get rid of Indians who hinder the colonization of America. Even though the story is set in North-America, the Battle of Little Bighorn will take place in modern Paris where Custer also faces many peculiar people such as the alluring female Marie-Hélène de Boismonfrais (Catherine Deneuve) as well as his former scout and now a pompous performer at a Parisian nightclub Buffalo Bill (Michel Piccoli). While Custer gets to know these intriguing characters a little better, the decisive combat gets more and more imminent…

Don’t Touch the White Woman is a prodigiously outlandish political satire which is closer to Marco Ferreri other movies than any spaghetti western ever made. It appears quite inadequate to cram this deliriously eerie work into the spaghetti western genre, best known for violent action. Spaghetti western makers often brought up political topics, but their movies never exceeded the genre's paradigms as much as this movie does. Marco Ferreri was an Italian auteur and an enfant terrible who used to mingle absurd, grotesque and bleak constituents in his incomparably odd creations. The premise of situating the Battle of the Little Bighorn in modern Paris will prove phantasmagorically bizarre for viewers not acquainted with movies such as Ferreri's infamous comments on the crisis of contemporary man within the capitalistic society such as La Grande Bouffe (1973) or his wonderfully conceived art-house classic Dillinger is Dead (1969).

In the first minutes of Don’t Touch the White Woman three men are having a dispute over the trouble with Indians, who impede the colonization of America, and contemplate the contingency of using violence against them. This is how Ferreri juxtaposes American politics in the twentieth century with the extermination of Native Americans; the Indians might as well symbolize leftists in this movie, which also seems to tackle the enmity of conservatives towards left-wing movements and to analyze how these traditionalistic governing sphere yearns to eradicate the people discarding traditional demeanor towards property, values and way of life, camouflaging their intents with glib terms such as “a final solution”. Perchance the director strives to convey the message that each group which craves to prevail and obtain certain rights for individuals is forced to unite, just like Petri’s The Working Class Goes To Heaven (1971).

However profound the second meaning might be, the Indians in Don’t Touch the White Woman are no doubt also a reference to real Indians and their extermination; this historic event is also equalled, so it seems, to the mass murder of Jews during the Holocaust. At one point, a couple of American soldiers place a bunch of Indians in a cellar of an old factory and ignite the place, no doubt a hint at the atrocities committed by Nazis during World War II. The motion picture also hints at the Watergate scandal, the Algerian Revolution and racism. Amidst numerous other political references, the flick rhetorically questions what American rulers meant (and mean) by the word “progress”; the implication is that it's just an euphemistic term encrusting the colonialism with a pall of vagueness.

Marco Ferreri ingeniously locates the plot in an almost dreamlike landscape with general Custer and general Terry roaming around modern Paris without being astounded the least bit by the outlandish setting environing them. Colonel Custer - impersonated by Marcello Mastroianni - is a vain military man who is infatuated with himself just like his milieu which admires and extols him as a crusader against the barbarian world of Native Americans. Surprisingly the surreal satire is handled in a quite confident way, endowed with pretty solid, distinctive and slightly caricatural characters, eliding the salient historical lunacy thrown into this eddy of European cinematic insanity. Fortunately, the narrative is more straightforward here than in Ferreri's nebulous and artsy Ciao Maschio (1978), in which the accumulation of avant-garde narration and typically weird Ferreresque synopsis turned out to be nearly indigestible. 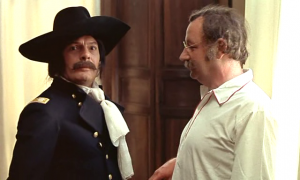 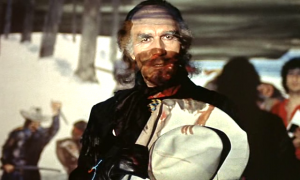 Ferreri mustered all four stars from his earlier pic (La Grande Bouffe) i.e. Marcello Mastroianni, who deftly plays general Custer, Michel Piccoli, who is hilarious as the emasculate, narcissistic Buffalo Bill, Philippe Noiret as general Terry and the great Ugo Tognazzi, who enacts the part of Mitch, an Indian scout of Custer who loathes Custer for treating him like an Indian. Each time Mitch approaches a white female, Custer forbids him to touch the white woman (this is where the title derives from). All of them mostly attempt to be funny and they indubitably succeed which is easy to conjecture as these are top-notch actors whose names ought to be known to anybody seriously fond of sixties and seventies cinema. There are also dexterous performances conveyed by Catherine Deneuve and Serge Reggiani.

Apart from the rather unremarkable action sequences, the cinematography by Etienne Becker is quite satisfying, capturing the strange imagery of the film in a relatively slick manner, framing modern entourage merged with historical costumes very well. The music by Philippe Sarde - responsible for scoring Bresson’s Lancelot of the Lake (1974) and The Devil Probably (1977) - is catchy and jubilant. Initially, the opening theme is formed from a tension-tinged, disharmonious orchestral cacophony mingled with the US cavalry trumpet; the tune seems to augur a more serious movie about mercilessly slaughtered Indians and human condition, but then it evolves into an ear-pleasing military march.

Don’t Touch the White Woman is a portion of acrid, political satire as murky as it can get. It is quite unusual that I alluded to some movies none of which was a spaghetti western. It partially stems from the fact that I don’t consider this flick to be a spaghetti western. Maybe except for multiple political connotations, Ferreri’s pic does not implicate much action, tension, style or anything even remotely similar to spaghetti westerns, not to mention that even some aspects of the sole premise undermine the argumentation that it is a western at all. The statement that Don’t Touch the White Woman is a spaghetti western is for me as contrived as claiming that Dillinger is Dead is a gangster pic because there is the surname “Dillinger” in the title. Ferreri intends to exhibit utter hypocrisy of colonialists through their grotesque behavior and therefore, he disregards crowd-pleasing action for the sake of yielding an anti-imperialist message. If one does not care about the political undertones, Don’t Touch the White Woman will prove a languorous and insipid viewing with little reward. It rather ranks amongst minor opuses in Ferreri’s oeuvre owing to being superfluously dogmatic and verbose. 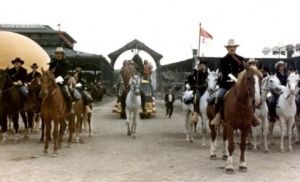 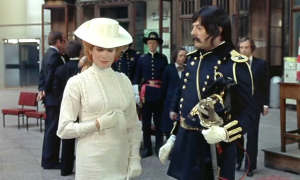 Retrieved from "https://www.spaghetti-western.net/index.php?title=Don’t_Touch_the_White_Woman!_Review_(Mickey13)&oldid=121748"
Categories:
Cookies help us deliver our services. By using our services, you agree to our use of cookies.