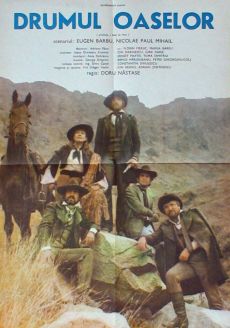 In 1848, idealists and adventurers seek a revolution in the Romanian principalities of Wallachia and Moldavia. The necessary weapons are to be acquired by transporting money abroad. While the daredevil criminal Margelatu supports the revolutionaries, police chief Villara gets wind of the venture. By all means he tries to stop the transport.

This is the first in a series of three Romanian films about the adventures of hero Margelatu, called the "Yellow Rose", played by popular actor Florin Piersic. The other two films are Trandafirul galben (1981) and Misterele Bucurestilor (1983). These films were quite obviously tailored after the Spaghetti Western, with Florin Piersic coming across like a Romanian version of Sartana, lots of hats, horses, action and gunfights. The music includes electric guitar and the camera is occasionally zoom-happy.

Retrieved from "https://www.spaghetti-western.net/index.php?title=Drumul_oaselor&oldid=114573"
Categories:
Cookies help us deliver our services. By using our services, you agree to our use of cookies.