Due once di piombo 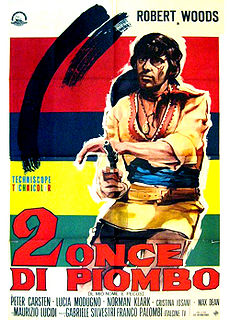 Pecos Martinez rides into Houston looking to settle an old score with gang leader Clane, who is after the money that disappeared from a recent robbery. The hunt for the loot and Pecos's quest become intertwined with the efforts of the locals to stay alive long enough for help to arrive.

The film is interesting with its Mexican hero but the actual film is quite average, if not worse. The scenery is rather uninteresting as is the gloomy town set. None of this is made better by the film's pace, as it is quite a boring film with a gimmick that wears thin pretty soon.

Maurizio Lucidi was mostly a director of comedies but in My Name is Pecos he made no fun (and no prisoners). This is a good, violent and straightly told revenger in which the usual racist cliches are turned in a nice way: the tall gunslinger is a Mexican while all the bandits and the cowardly citizens are obviously white Americans. A good role for Robert Woods.

It was successful enough to spawn a sequel a few months later (Pecos Cleans Up), which unfortunately didn't preserve the original's mood, abandoned in favour of a comedy style.