One of the first spaghetti westerns, this movie also started a thing called title chaos, a phenomenon inevitable associated with the genre. In Italy it was called Duello nel Texas, in Spain El Gringo or simply Gringo. The international title became Gunfight at Red Sands, a translation of an alternative Italian title that was never used, Duello nelle Sabbie Rosse. It even got a third Italian title, a working title (as far as I know) never used officially: I Lupi del Texas (The Wolves from Texas). As more often, the German title is quite bizarre: Drei gegen Sacramento (Three against Sacramento).

Because Richard 'Gringo' Harrison's foster father (a Mexican) is killed by three men, I supposed that Gringo's name in the German version was changed to Sacramento. Accordng to the German Wiki, this is not true. So where does this name Sacramento come from? The film is set in and around a village near the Mexican border, so not in Sacramento, California. The murdered foster father had found gold on his land (and is therefore killed), could that be the - dubious - link to Sacramento (and the Californian Gold Rush)? Who knows. Peckinpah’s Ride the High Country was called Sacramento in Germany, but it’s doubtful whether that movie was successful enough for other movies to be retitled with the name ‘Sacramento’ in it. So maybe it’s just one of those nonsensical German titles. If virtually every avenger is Django, virtually every town might be Sacramento.

Leone didn’t like the score Morricone had written for Duello nel Texas. He thought it was a typical old school score, ‘un Tiomkin dei poveri’ (a poor man’s Tiomkin). He therefore wanted to ask Angelo Francesco Lavagnino (who had done The Colossos of Rhodes for him) for a score for A Fistful of Dollars, but Papi & Colombo wanted him to talk to Morricone first. When the two finally met, Morricone showed Leone a picture which showed that they had been class-mates at the elementary school Saint Juan Baptiste de la Salle, a school run by a catholic educational order known as the Scolopi (Poor Clerics of the Mother of God).

Morricone proposed two compositions, the first one was a piece that had been rejected by the producers for the previous film. It was different from what he had done before, more solemn and plaintiff. Leone liked it but asked Morricone to chance a few things. It would become the dramatic theme, used during the finale, prior to the shootout. The second composition was called ‘Pastures of Plenty’, a song by Woody Guthrie (based on a traditional folk song called ‘Pretty Polly’), for which Morricone had done the orchestration. It had become a small hit in Italy in the version of Peter Tevis, who had also recorded the theme son A Gringo like Me for Duello nel Texas (in the movie it was sung by Dickie Jones). Leone didn’t like the idea of a theme song with lyrics, but couldn’t get the melody out of his head. Instead of a human voice, a human whistle was added to it, plus some strange choral chants, and the sound of whips and gunshots, and the thing became one of the most spectacular theme songs in the history of film making.

Richard Harrison, the Man who wouldn’t be No Name

He was one of the muscular American actors who came to Europe in the early 1960s to appear in sword and sandal movies. Unlike his colleagues Brad Harris and Steve Reeves, he successfully made the transition to other genres such as westerns and spy movies. After completing Duello nel Texas, he was asked by producers Papi & Colombo to do a second western for them, one that was to be directed by a man called Sergio Leone. Harrison had never heard of Leone and was also offered another role, in yet another sword and sandal movie, The Giants of Rome. The name of the director of that movie was Antonio Margheriti. Harrison asked several people and they all told him that Margheriti was the better director of the two. He then decided to do the peplum. The biggest screw-up of my life, he later confessed in a couple of interviews.

Harrison was not Leone’s first choice. He had wanted Henry Fonda for the part of the magnificent stranger, and a copy of the script was indeed sent to Fonda’s agent, who sent it back without showing it to Mr. Fonda. A copy was also sent to Charles Bronson and James Coburn. Bronson read the script but thought it was rubbish, Coburn showed some interest but wanted $ 25.000, which was way beyond Leone’s means. Many people have claimed that they were the very person who advised Leone to take Clint Eastwood. The person who attracted Papi & Colombo to the actor, was an employee of a local agency who had seen him as Rowdy Yates in Rawhide. Clints name came on a list with two others (nobody remembers the other two names), which was shown to various people, among them Richard Harrison (and probably Mark Damon as well). Harrison told Jolly Films to take Clint … because he could ride a horse. These days he talks with a smile about this biggest screw-up of his life: My biggest contribution to world cinema was turning down the the role of No Name and recommending Clint for it. 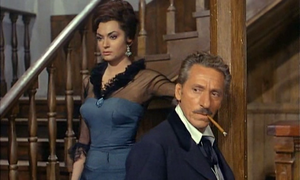 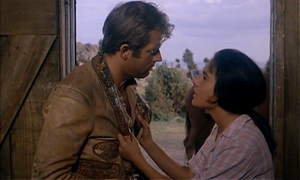 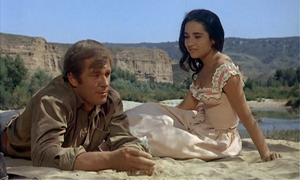 Retrieved from "https://www.spaghetti-western.net/index.php?title=Duello_nel_Texas_-_The_Extras&oldid=100944"
Category:
Cookies help us deliver our services. By using our services, you agree to our use of cookies.