From The Spaghetti Western Database
< E vennero in quattro per uccidere Sartana!
Jump to: navigation, search 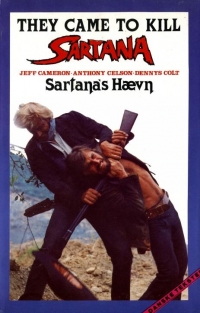 In some town, I already forgot the name of it, a new mayor is elected. After this event a number of abductions take place. These costly crimes are masterminded by the mysterious Mormon. This long haired fellow is only filmed from behind and when he orders his gang around, he does so from behind a painting of which the eyes are cut out. To the average viewer it would seem logical that the losing candidate of the election is in fact the Mormon. But what is the use of logic in the world of crap maestro Fidani? None.

Sartana is put on the case. As the Mormon feels this legendary gunman hot on is trail, he hires no less than four professionals to get rid of him: A muscleman, a knifethrower, a guy who is good with the bullwhip and a lightning fast pistolero. Sartana is up for a tough ride trying to get rid of the specialists. Besides that, he also has to reveal the true identity of the Mormon...

A casual glance at the name of the director reveals it can only be trash we are dealing with here. This is not necessarily a bad thing in my book, as Fidani usually makes something fun out of it. This is also the case here, even though the film takes off late, past the half hour mark. A platinum blonde Jeff Cameron portrays the title hero and does so in utterly bland fashion. It's not really his fault though, as the script lacks any form of imagination and is merely an episodic excuse for the several brushes Sartana has with the specialsits trying to kill him. Those scenes do however provide some entertainment.

As a whole this western makes little impression. Not even in the annals of pulp there will be a place reseved for this film. Yet somehow, be it barely, it manages to entertain, despite the fact the cinematic energy and cheer of, for example, Fidani's Savage Guns is absent here. The unimaginitave recycling of existing scores is further proof of the lack of proper ideas. Also a shame is the fact that the director's daughter -the most beaustiful thing he ever made- is pretty much wasted here.

Despite the long list of faults, I am usually content with Fidani's movies. They possess some sort of amateuristic magic; as far as magic can come amateuristically. It's not always the case though. Just take a look at the abominable Django Story, but here there's magic. A tiny bit.

Retrieved from "https://www.spaghetti-western.net/index.php?title=E_vennero_in_quattro_per_uccidere_Sartana!/Review&oldid=115457"
Category:
Cookies help us deliver our services. By using our services, you agree to our use of cookies.