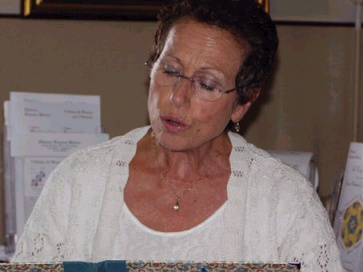 Since the mid-1960s, Edda Dell'Orso has provided haunting wordless vocals to a large number of film scores by Ennio Morricone and other prominent, mostly Italian composers of those times; Piero Piccioni, Bruno Nicolai, Roberto Pregadio and Luis Bacalov.

But her name is synonymous with Morricone and in particular, the soundtracks of the original spaghetti westerns of Sergio Leone, such as "The Good, The Bad, and The Ugly" and "Once Upon A Time In The West", where her dramatic voice was deployed as an instrument for the first time and to revolutionary effect.

The singer's sensuous and often playful vocals help provide tense atmospheres and dreamy moods to these soundtracks, as well as to the scores for Leone's "A Fistful Of Dynamite", composer Piccioni's lovely music for the film "Scacco Alla Regina", and Spanish composer Anton Garcia Abril's strange but highly effective score for the offbeat 1967 sci-fi drama "4-3-2-1 Morte!", that with Edda's assistance somehow successfully helps blend an atonal chamber orchestra with a go-go beat and cartoon jazz.

In the 1970s, Edda contributed to two films by Italian shock horror director Dario Argento, including "L'uccello Dalle Plume di Cristallo" (The Bird With Crystal Plumage), and then in 1976 collaborated with the Italian progressive instrumental group Goblin (often used by Argento as well) for "Perche Si Uccidono?" (Why Do They Kill Themselves), a film essay about drugs and self-destruction.

She continues to perform and lives today in Italy with her husband, conductor and composer Giacomo Dell'Orso.