Diego Medina, a young intellectual revolutionary, has stolen documents containing information crucial for the defense of the city of Zacatecas. The documents are stolen from the office of general Medina Barros, who happens to be his father’s cousin. Diego plans to go to the front with the general under the pretext of being a war correspondent for a San Francisco newspaper, so as to smuggle the documents to Pancho Villa. This plan falls through, as he is immediately suspected by the police. Diego makes a narrow escape, and the government issues a 10.000 pesos reward for him.

A government agent is sent to Aguas Calientes to offer the Sierra Madre bandit Malpelo the reward and the rank of Captain in the federal army for the capture of Diego Medina. This is accomplished easily enough, as Medina is in bed with Malpelo’s favourite Aguas Calientes prostitute when Malpelo arrives at the posada on the same errand. However, Malpelo does not stand by his agreement with the police; as Medina, hearing of it, offers him 50.000 pesos and the rank of Colonel in the revolutionary army to take him to Pancho Villa’s headquarters instead. 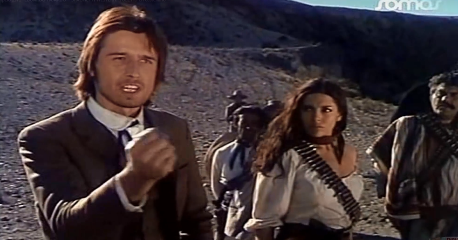 The film deviates from your usual Zapata western, in the respect that the Diego Medina (played by the otherwise unmerited actor George Carvell) is not a gringo, not an American, nor is he a European, as assumed by some critics. He comes from a wealthy Mexican family, and Madero used to be a family friend. However, he has studied at Berkley University, and he plans to take his Mexico City girlfriend, a dancing girl, back to California after his mission is completed. But, as the gringo always does in every Zapata western, Diego ends up staying in Mexico.

Between the two men stands Malpelo’s comrade in arms and bed companion, Lupe, who also is attracted to Medina, a gentleman of a kind she has no previous experience with. Lupe is strongly played by Charo López, who by the way studied philosophy before her acting career. López also played the female lead in Anda muchacho, spara! released the same year as Malpelo. 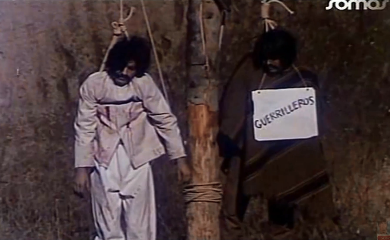 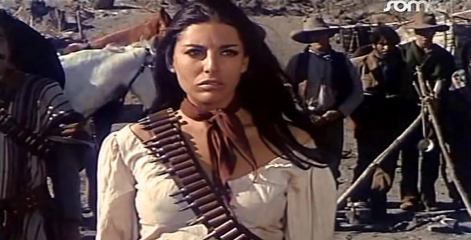 The film is unusually violent, even for a spaghetti. It starts out with a group of revolutionaries in front of a federales firing squad. Then, in between the opening credits, we see the dead or dying on the ground receiving the head shot, one by one. This is cut in the Spanish version; here we only hear the shots. Parts of the massacre of the people of the city of Rechipango, as well as some other random killings at the hands of the federales are also cut. As Malpelo's conversion is not caused by Diego’s eloquent speeches, but by what he sees with his own eyes (an old woman shot, a young girl raped, a child fleeing shot in the back) these cuts do considerable damage to the story.

The battle of Zacatecas, also known as the Taking of Zacatecas, took place in June 1914. It was the decisive battle in the campaign to overthrow President Huerta, and the bloodiest one. The attack on Zacatecas was staged by Pancho Villa's División del Norte, and the defense was led by General Luis Medina Barrón. Huerta fled into exile on the 15th of July 1914.

Retrieved from "https://www.spaghetti-western.net/index.php?title=El_Bandido_Malpelo_review&oldid=126751"
Category:
Cookies help us deliver our services. By using our services, you agree to our use of cookies.