From The Spaghetti Western Database
(Redirected from Eli Wallach)
Jump to: navigation, search 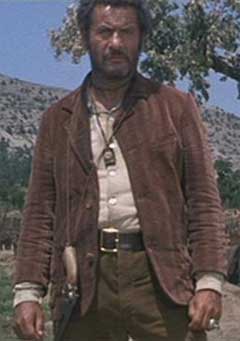 Eli Wallach might have starred in more Spaghetti Westerns if he'd had his way. After playing Tuco, "the Ugly" in The Good, the Bad and the Ugly, Sergio Leone wanted Wallach for Duck, You Sucker! (A Fistful of Dynamite), but Wallach could not fit the film into his schedule. Leone persisted, and Wallach eventually relented. However, then the studio producing Duck, You Sucker! wanted to cast Rod Steiger in the role instead. Leone called Wallach to apologize, but refused to offer any compensation to Wallach, who had given up a chance to act in two other films,. "I'll sue you," Wallach told the director, to which Leone answered, "Get in line." It was the last time the two spoke to each other.

Wallach had trouble with Leone earlier while filming The Good, the Bad and Ugly, when a film technician set a bottle of acid next to Wallach's bottle of soda. Wallach accidentally took a swig of acid. He spit it out immediately and was unharmed, but he was furious with Leone, for what he considered to be lax safety standards on the set.

Nonetheless, Wallach respected Leone as a director. Wallach advised Henry Fonda, who was skeptical of Leone, to take a role in Once Upon a Time in the West. After the film was a success, Fonda called Wallach to thank him.

Wallach was born on December 7, 1915 in Brooklyn, New York, to a Jewish family, but grew up in a mostly Italian-American neighborhood. He graduated from the University of Texas at Austin and a earned a master's from City College of New York. He was trained as a method actor. He served in the U.S. Army as a second lieutenant, and was sent to Casablanca and France as a medical staff officer, and put on plays for patients. After the war, he acted on Broadway, and went on to act in dozens of films. Among his other notable roles was as the villain in The Magnificent Seven.

He passed away in June 2014 after a rich career and life. He will be sorely missed.

See below for films with Eli Wallach

Retrieved from "https://www.spaghetti-western.net/index.php?title=Category:Eli_Wallach&oldid=99093"
Category:
Cookies help us deliver our services. By using our services, you agree to our use of cookies.