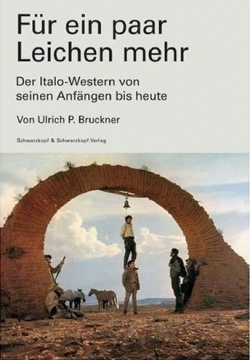 ! This book is released in Germany, and all text is German. However, most of the data, an index that also includes international titles, and a wealth of pictures makes this book interesting even for those not familiar with the German language.

Mr Bruckner counts among the most acclaimed Spaghetti Western authors and experts today. Not only was the previous edition of his book like a bible to many fans and laymen, he successfully launched a series of DVD releases at Koch Media, whose home cinema department he heads. Those releases are some of the best releases of Spaghetti Westerns on DVD to date. His book, "Für ein paar Leichen mehr - Der Italowestern von seinen Anfaengen bis heute" (for a few corpses more - the spaghetti western from his beginnings to today) is a paperback encyclopedia heavyweight, that promises to be the most extensive look-up resource on the genre. The original edition has long been out of print and this new edition is more than just a reprint, it is a revised and extended edition. According to the author and the publisher, countless errors have been fixed, information has been added, films removed and added, color pictures added and lots more. I do not have the original edition as a reference, but the book I am now going to walk through for you definitely is a stunner, it is not only heavy but it looks good, too. At about 730 pages, the book surely is no weekend read. And it is not supposed to be. Aside from a few introductory articles, the book is most of all an encyclopedia. He starts off with a foreword, that sets the mood for what's to come, in talking about a recent revival in demand for films of this genre, which is channeled through increasing broadcasts of Spaghetti Westerns on various tv channels and new releases of previously unseen classics on DVD. Many of the old stars have died, too, and I would say it is a special honor to those who have passed away, that their work (and for many of these actors work in spaghetti westerns has brought fame and money on the one hand, but was considered less prestigious and came at the end of their careers on the other) is increasingly appreciated by film fans all over the planet.

Bruckner dives into the material with an eight page retrospective into the genre, tracing the early beginnings (the German western for example), the first blockbusters (Leone and companeros) and the genre's decline in the late 1970s with the rise of the slapstick western and a few "late westerns" (such as Keoma). What the author does particularly well is that he doesn't dive too deep. He succeeds at giving a rough overview of what his book is going to cover over the next couple hundred pages, while also profiling the genre and some of the must-know names and facts. Speaking of names and facts, in another 3 pages, Bruckner tries to typologize the Spaghetti Western into three or more general schemes and a fistful of motives. I would describe that effort as halfway failed, because of the 600 or so spaghetti westerns, the lines are blurred a lot, motives mixed and director's intentions altered by producers and distributors. While none of his assumptions are outright wrong, his classification into 1964-67, 66-68 and 67-71 plot schemes seem a bit hard to acknowledge. Nonetheless, his ideas might serve as helpful starting points for analyses of his films.

Pages 19 to 438, a stunning amount of text, facts and pictures, are the heart of his book. In what he calls "the best spaghetti westerns of all times", he gives plot descriptions, short reviews and press texts to a large number of films that he deems worth special mention. The articles are sorted by year, which opens up some perspective into release patterns and box office considerations, as well as copycat tracing for those who like to watch out what film copied the idea off of what other film. Bruckner spends considerably more time on such high-profile films as "A Fistful of Dollars" than on others, and rightly so. His plot summaries are at times very detailed and where he provides background information and analysis to films, they are almost always very nice to read and very informative. A feature that I do not hold very high, but is very interesting, are the press voices he added to almost all films. While those texts do not add a lot of value, they offer some insight into how these films were held by the public media back in those days. Sometimes they give an indication and glimpse into the future of a great film, and thus are very much in accordance of how we think of a film today. The book is interspersed with illustrations such as movie posters, behind-the-scenes photographs or stills or screen shots from the films. An impressive collection of artwork, which has in the past been described as a main reason to buy this book even though you can't read German. I detect a major flaw in this book, and that is titles. Bruckner lists the "original" Italian title and its most popular German title, but ignores most spaghetti western fans' constant struggle with releases from all over the globe, which makes it enormously important to be able to associate English and international titles with most of these films. The author does not list the major international titles, and while that might not bother the average German reader of the book, it would have added a lot of value to it (but you can of course just use this website to quickly look them up of course). What he does do, and this is how I make my point invalid, is to do just that in the later section of the book (read below). The author does have his own language and it shines through most of the book's articles. It is not a scholarly book, the texts are the authors opinions and viewpoints and I have found myself to disagree with the author at numerous places in the book. Just like the "little brother" of this book (the stripped down version that was included in Koch Media's Sollima DVD Box), it is still a very valuable method to check out new films: assuming you have not watched a particular film, you read Bruckner's articles and then you can value for or against watching the film, or the other way around, you watch the film, and then see what Bruckner has to say about it, an approach I usually tend to prefer (and which usually leads me to disagree with his viewpoints, but isn't that the greatest thing, a discourse?). The middle of the book is decorated with a set of beautiful color pictures from a range of films. Something for the eye so to say. While most of those pictures are available else where, it is nice to have them in decent quality in a book, because part of the joy in loving Spaghetti Westerns comes from the nostalgia surrounding it. Many a film from this genre lives through the mood it creates through posters, music, trailers and its reputation. What follows are alphabetical filmographies of actors, directors, writers and composers. A valuable index of names (and pictures) that make it easy to look up join ventures and see which names were the most prominent of the genre in terms of sheer output. The author has conducted a series of interviews with still living 'legends' of the time, those are part of this chapter and make for a very interesting reading. He has interviewed Sergio Sollima, Enzo Castellari and others. The book even boasts filmographies of cinematographers and biographies and interviews with composers. Especially great is a list of recommended soundtrack compilations. 10 pages of location scouting follow. Bruckner has visited and published pictures from, locations in the past, so this time he lists only picture comparisons of locations he has visited since then or not talked about in the past. I personally think a more completist approach here would have fit better, but it is nevertheless nice to see those pictures and for those of us wanting to travel to Almeria or Tabernas, they can serve as a valuable tourist guide.

The true encyclopedic part of the book begins at page 454 and ends at page 702. A complete list of all spaghetti westerns, with their international titles, running times, producing companies, country, some pictures and so on. The true fan will have earmarked or bookmarked that section of the book in only a matter of days. If you're not already using this website like you're favorite new website next to Google, that section of the book is the main selling point. It is also this section, stripped down, paired with short summaries that comprises this book's "little brother". Just when you think you're finally through the book, the author crosses the is and dots the ts with a top 25 list of spaghetti westerns (yet he does not give away how and where that list was compiled. But you can compare with our own top 20 if you'd like), a top 20 list of soundtracks (again the source is a bit vague), an enormously helpful list of actor pseudonyms, director, writer and composer pseudonyms, a few song lyrics (for example the Django title song) and last but not least a film title index (German titles only) with page numbers for quick access.

It is not hard to present a verdict on this book. Bruckner proves that he is an authority in the field by releasing another and even better version of the ultimate spaghetti western encyclopedia. While it is truly not without flaws, and especially in the age of the internet, most of its features are not as useful anymore as they were in times where you really took a book into your hands to look something up, the book is and will be for a long time, one of the prime examples of books on cinema that take their audience and their genre serious. The book is a great and entertaining read, offers great commentary on a huge number of films and is sprinkled with a truly impressive collection of picture material. There is no reason I can think of that would prevent a true fan of the genre from putting this thick paperback into their shelf, maybe next to the DVDs of all these great movies.

Retrieved from "https://www.spaghetti-western.net/index.php?title=Für_ein_paar_Leichen_mehr_(book_review_in_English)&oldid=43952"
Categories:
Cookies help us deliver our services. By using our services, you agree to our use of cookies.