Leone had rejected Harrison (or Harrison had rejected Leone), but several other actors who had appeared in Duello nel Texas, would also appear in A Fistful of Dollars, like José Calvo, Aldo Sambrell and Daniel Martin. Director of photography Massimo Dallamano had also done the cinematography for Papi & Colombo’s previous western. He replaced Leone’s first choice, Tonino Delli Colli, whose financial position didn’t allow him to work for a ridiculously low fee. Some have wondered why Leone didn’t ask Barboni, who was, like Delli Colli, a friend and had brought his attention to Yojimbo. Anyway, Dallamano did an excellent job and Leone would ask him again for For a few Dollars More. Production designer Carlo Simi was contracted rather late. Leone and Palaggi had already asked another production designer to make a few sketches when they met Simi. The sketches were shown to him, and Simi said they were ridiculous. He showed some of the things he had designed for Corbucci’s Minnesota Clay, which was put on a hold, and Leone immediately told Simi he would get rid of that other production designer, who was a complete idiot. Tonino Valerii became assistant-director; Franco Giraldi was added to the team as second-unit director by Papi & Colombo. 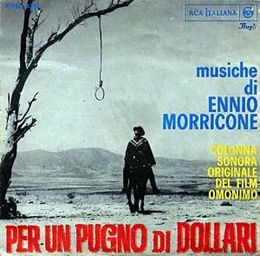 Remarkably, Ennio Morricone wasn’t Leone’s first choice for the soundtrack. Leone knew Morricone vaguely (they were both Romans) but wasn’t very fond of the things he had written for Duello nel Texas, and therefore wanted to ask Angelo Lavagnino to write a score for his movie, but Papi & Colombo wanted him to talk to Morricone first. Leone visited Morricone at his home and discovered that they had attended the same school when they were kids. A Fistful of Dollars marked the beginning of one of the most illustrious collaborations in the history of film making. Morricone was well aware of the setting of the movie near the American-Mexican border; the score had to breathe an American as well as Mexican air; he also wanted it to sound classic and modern, solemn and crisp at the same time. He was inspired by several western scores by Dimitri Tiomkin, notably his scores for Rio Bravo and The Alamo. The trumpet theme is similar to El Deguello from the Rio Bravo soundtrack. Rio Bravo was called Un dollar d’onore in Italian, and some think it inspired Leone to change the working title, Il Magnifico Straniero, into Per un pugno di dollari. As far as the now famous whistling theme is concerned, most people have related it to Tiomkin’s score for Gunfight at the O.K. Corral, but there are also stories about Leone liking a Woody Guthrie song, Pastures of Plenty, that had been arranged for orchestra by Morricone the previous year. Leone wanted something similar in the movie, but with some instrument replacing the lyrics. In this reading, Morricone therefore contacted Alessandro Allessandroni, a musician and composer who was also known for his trademark whistle. Allessandroni also played the guitar on the soundtrack. The trumpet is played by Michele Lacerenza.

Filming started in April 1964, although some of the people involved sustain that some scenes were shot as early as February. If so, these scenes did not involve Clint Eastwood, who only arrived in April in Rome. The first scene that was shot, was the torture scene with Eastwood and Brega. Like most interiors, it was shot in the Elios Studios. Afterwards the crew went to Torre de Caldana, south of Rome, to shoot the grotto scene, in which a wounded Eastwood prepares himself for the final showdown with Ramon. By the end of September, they flew to Spain, first to Hoyo di Manzanares and Colmenar Viejo, near Madrid, where it was rather chilly, then to Almeria, where it was less chilly, and soon became very hot. Eastwood had his first unpleasant experiences with working in the desert. Money was saved by using existing sets and buildings, and Carlo Simi also rebuilt some of the sets used for Pistols Don’t Argue. For the Rojo residence, the existing Casa de Campo was used, a museum in Madrid with a variety of empty rooms and courts that could be fitted up by Simi; the baroque residence of the Baxters was especially designed for the movie. It was a plagued production. The main problem was that the Spanish laborers who worked on the various premises weren’t paid by the Spanish co-producer Jaime Comas. He had promised 30 million lire, but payments were frozen after the first week. Leone and his men couldn’t even pay the bills for their daily meals in town, and on several occasions they weren’t allowed to set foot on the sets. Finally Arrigo Colombo arrived on the set with a suitcase full of money, 30 million lire in cash. If the money had been discovered in the airport, it would have been confiscated and the world would probably have never seen A Fistful of Dollars. 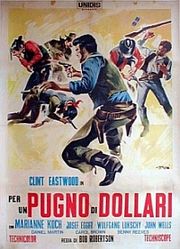 It has often been suggested that the film did miserably in the first few weeks after its initial release, and then, out of the blue, became a smash hit. In this version of the facts, A Fistful of Dollars was released on August 27, in a small theatre in Florence, and an employee of the distributor had to buy tickets (and distribute them to travelling salesmen) so that the owner of the cinema wouldn’t withdraw the film. Giusti has found out that it most probably was all made up by Leone (and spread by Chris Frayling and many others). The film was released for publication by the Italian censor on September 1st, so it couldn’t have been released in August. It actually was released on September 12th, in a smaller cinema in Florence, and although it wasn’t an instant hit, it did reasonably well, and started to attract larger audiences by the end of the month. It was transferred to bigger cinemas and by mid-November the movie reached Rome, where it was shown in Cinema Arlecchino, where Leone had first seen Yojimbo. Halfway through December, it had almost doubled the Italian revenues of The Magnificent Seven, the biggest western money maker in Italian cinemas in recent memory. It was now released in all major cities, and had to compete with the Hollywood blockbusters of the year, My Fair Lady and Mary Poppins. With revenues of over 3 billion lire, A Fistful of Dollars got the better of both ladies.

Apart from the movie’s own qualities, a few other elements may have contributed to its success. It got a fairly good review by reputed film critic Tulio Kezich, the most influential Italian film critic of the post-war era. He objected to the film’s brutality and excessive violence, but noted that it was very well-made and held its own with the prestigious productions from Hollywood. Other critics didn’t even notice that it was a home made product (foreign language movies were inevitably shown in dubbed versions) and called Bob Robertson a promising young director of the western movies. Furthermore a TV series starring Gian Maria Volonté was aired when A Fistful of Dollars hit the Italian cinemas. His appearance in the movie, made it identifiable as an Italian western. So far, Italian film makers had been trying to hide their nationality behind fake American pseudonyms, because they thought the audience would find the idea of a home made western ridiculous, but maybe this was a mistake. Audiences loved the idea of a western made in Italy.

The film’s immense success attracted some attention Leone nor his producers had reckoned with. Leone received a letter from Akira Kurosawa in which he was congratulated with his very nice film. But Kurosawa added that it was his film and Leone therefore had to pay him. Both Leone and Papi & Colombo tried to argue that Yojimbo was only one of the many sources that had inspired the movie. Another one was a play by Carlo Goldini, A Servant of two masters, and Leone also referred to an American novel by a then not too well-known writer, Dashiell Hammett, called Red Harvest as a source of inspiration (it would have been more sensible to argue that Yojimbo had been inspired by Hammett’s novel). Like Alex Cox has stated, Leone and his producers had no leg to stand on. Yojimbo may not have been entirely original itself, it's clear that A Fistful of Dollars is an almost scene-for-scene remake, featuring similar characters and offering similar twists. If Leone and Jolly Films would have paid Kurosawa immediately, they would have saved themselves a lot of money. Toho Film sued them and finally required the Asian rights for the movie plus 15% of the international sales. The film became an incredible success in Asia, and made alone in Japan far more money than Kurosawa and Toho Films had asked for initially. When the lawsuit was finally settled, the relationship between Leone and his producers had also reached its nadir. 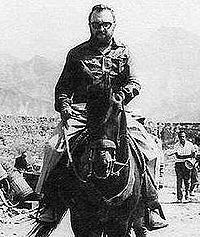 # No more Dollars for Papi & Colombo

Arrigo Colombo had eventually saved the production of A Fistful of Dollars with a suitcase full of lire, but Leone was appalled that Jolly Films had done next to nothing for his movie, and dedicated all their care and attention to Caiano’s Pistols Don’t Argue. He also had the idea that they had let him down during the conflict with Kurosawa, and had sworn never ever to work with the two guys again. However Leone still had a contract for a series of B-movies for Jolly Films. Nobody was interested in those movies anymore, but Papi & Colombo desperately tried to convince Leone and Eastwood to do the sequel for them. Leone told Papi & Colombo that he would never do a western again (but told others that he would, if only to get even with those two bastards), and Eastwood said that in Italy, he’d only work with Leone. The sequel made even a Few Dollars More, but they weren’t for Papi & Colombo.

Retrieved from "https://www.spaghetti-western.net/index.php?title=FISTFUL_-_The_Whole_Story,_part_2&oldid=140183"
Categories:
Cookies help us deliver our services. By using our services, you agree to our use of cookies.