Review of Cultcine's DVD release of Face to Face 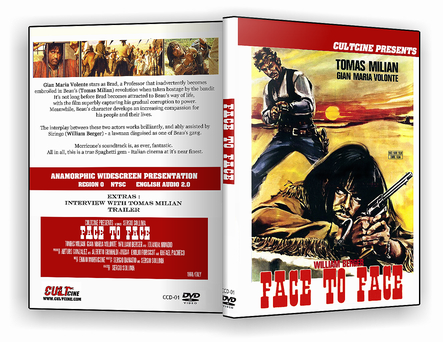 Cultcine is an American self-described "gray-market" company that puts together and releases spaghettis and other cult films that do not have official Region 1 releases.

Usually in most fans' top 10 or 20, Face to Face is Sergio Sollima's excellent film that stars Tomas Milian, Gian Maria Volonte and William Berger. Volonte stars as a professor named Brad Fletcher, who moves to Texas due to his ailing health. Fate has him abducted by the outlaw Beauregard Bennet (Milian), and over the course of the film, we see their moralities both shift. Fletcher, once a moral, intellectual, becomes an egotistical, ruthless outlaw, who takes over Bennet's gang. Bennet, on the other hand, after listening to Fletcher talk about using his mind, reaches a point where he tires of violence and killing. To complicate matters, they are pursued by a Pinkerton agent named Siringo, played by William Berger. The three meet in a climactic showdown at film's end.

If you haven't seen this one yet, make sure you do. It's one of my favorite spaghettis, and has a depth and substance that is all too rare in the genre. Phil H has a more in-depth review here.

Those of you who frequent the forums have probably read the Cultcine thread, and are aware of the controversy, in that they take and sometimes clean up films without an official release in the U.S. from other sources , hence the "gray market". They're often pressed on DVD-R's (although this one and some other recent releases are "factory-pressed", according to the site). Sebastian thought it would at least be worth looking at some of them, so I'm not going to get into the controversy here. Jay at Cultcine answered all of my questions, so here's the deal -

The video is taken from the French (Seven7) transfer, and audio is mono, taken from a UK broadcast, with a few segments using the SPO audio (the UK broadcast audio sounds much better than the SPO). It's a proper PAL to NTSC conversion with no frame blending and it's a Anamorphic Progressive scan transfer, which looks pretty good. I noticed that even though it wasn't a DVD-R, the total file was 4.21 GB, so I'm not quite sure of the compression, although I didn't detect any pixelation or obvious artifacts. The DVD case was pretty basic, with the artwork from one of the posters, and there is no insert. There is an all-too-brief interview with Tomas Milian as an extra (taken from the Seven7 Sentence di Morte DVD).

Two gripes - there is an overlay at the beginning of the credits that says "Cultcine.com". I think that's a bit intrusive, and things like that don't belong on the screen once the actual film has started. Also, the lettering for the menu selections is very unclear and difficult to read.

Based just on what was on the disk, if you're in the U.S. and don't have the money to buy an import, the quality on the disc is pretty good, and I found it better than my SPO release. As to the controversy of Cultcine using other versions in their work, people have a variance opinion on that, so whether or not you pick this up would depend on how you feel about that. Jay has said explicitly that when official Region 1 releases come out for the films they offer, he will pull the title. It's not a bad alternative if you're okay with the gray market aspect of it.

This DVD was provided to us by Cultcine.