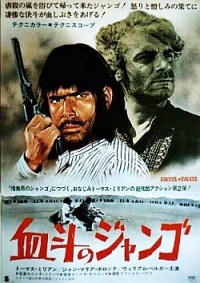 Spaghetti Westerns have the reputation among many non fans of being simplistic, ultra violent actionfests devoid of any depth or moral code. And while, in many cases that is a reasonably accurate if somewhat harsh description, there are a number of films in the genre which defy such categorization. The films of Sergio Sollima always stand as shining examples of what the genre could deliver in terms of character development and thought provoking narrative and Face to Face is probably his most accomplished film in those terms.

Face to Face follows the meeting and development of two diametrically opposed characters, thrown together by fate, who shine contrasting lights on each others strengths and weaknesses and ultimately influence life altering changes in one another. A mild mannered history professor from Boston, Brad Fletcher (played by Gian Maria Volonte) moves to Texas for his health where he encounters ruthless outlaw Beauregard Bennett (Tomas Milian) and becomes entangled in the rough and violent life of the bandit. To begin with Fletcher is the voice of moral reason in a wild environment but as time goes on the educated easterner becomes increasingly seduced by the wild life of the outlaw and the power of the gun. Realising that his intellect and education give him an added advantage when combined with ruthless violence and blind ambition. An advantage which ultimately leads him to take control of the outlaw community and dream of crimes on a grander scale than Bennett could ever conceive. Meanwhile, Bennett himself undergoes changes and discovers a new level of morality and conscience as the story progresses.

Throughout this transition the theme of violence and how it is used and excused by different elements of society is constant. Early on in their relationship Bennett is showing Fletcher how to shoot a pistol, something the professor had never done before but which he gains an instant affinity for. However, when faced with shooting a living target, initially a rabbit, instead of an inanimate target Fletcher balks and declines to pull the trigger. Bennett is confused by this resistance and asks: "Didn't you ever eat rabbit back east"? To which Fletcher replies "Yes of course, although we have someone else do the killing for us so we don't think about it."

But Fletcher is only too aware of the false civility he has been living with. That brutality exists throughout human society but that some are more shielded from it than others. He also quickly becomes aware of the dangers inherent in engaging in violent activity at first hand. Not just in a physical sense, but also on a more intellectual and pyschological level. As he says to Bennett "Out here in the west it's difficult to distinguish the instinct for survival from the lust to aquire power."

Bennett is clearly represented as a character who lives in a violent world and uses violence instinctively in order to survive and make a place for himself with the attributes he has available to him. Fletcher, on the other hand, becomes a man who is seduced by the power of violence and begins to use it to achieve intellectualised goals. Personifying in the process the clinical cruelty of political and military brutality. 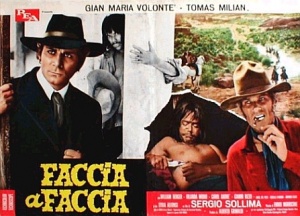 There is a key scene towards the latter stages of the film which highlights this very clearly. A Pinkerton agent called Wallace has been sent to infiltrate Fletcher's gang but he is immediately exposed and taken captive by Fletcher who proceeds to torture him. He does this, so he tells the hapless agent, "because it is good for morale." Wallace is played by none other than my old favourite Lorenzo Robledo, a professional victim in this genre who appeared in countless pictures but usually only for long enough to be gunned down, knifed or beaten to a pulp by someone or other. In this case good old Lorenzo is lashed to a wooden cross and beaten before being executed by Fletcher in a chillingly detached fashion. But before his inevitable demise his character has an important interchange with Fletcher in which the newly power crazed villain explains his thinking and the reality of how violence is perceived on a larger social level. He says: "One violent soul alone is an outlaw. A hundred is a gang. But they are an army at a hundred thousand. That is the point. Beyond the confines that limit the outlaw and individual, criminal violence by masses of men is called history!" He then calmly signals for a gun and proceeds to murder the helpless agent, explaining: "Reasons of state Wallace. You studied history so you know what I mean. Not out of hate, but with compassion."

This idea of brutality being acceptable when perpetrated by larger organised forces is also highlighted when the gang of vigilantes organised by the local ranchers to clear out Fletcher's camp set out to collect the bounties set on the heads of every man, woman and child in the settlement. This gang, led by a former outlaw friend of Bennett's proceed to murder not only with impunity but with semi official backing. A final example of violence being condoned when perpetrated by those on the 'right' side.

This highly political and thought provoking narrative is superbly scripted by Sollima himself along with the wonderful Sergio Donati who also collaborated with the director on The Big Gundown as well as with Leone on For a Few Dollars More and Once Upon a Time in the West. It also benefits from a spectacularly discordant score by Ennio Morricone. Genuinely one of his very best and most memorable works.

The characters are also expertly portrayed by a premier cast. Volonte and Milian were both theatre trained actors who brought a commitment to their craft as well as almost manic levels of intensity to every film they worked on. Both, possibly because of their theatrical background, have a propensity to overact at times but in this project they are both surprisingly understated. In particular, Volonte gives one of his finest performances, although I have to admit to enjoying him most when he is in full out, over the top mode.

The supporting cast, always an important feature of any Spaghetti Western, is led by William Berger as Pinkerton agent Charley Siringo and also includes Aldo Sambrell, Gianni Rizzo, the lovely Linda Veras and of course the afore mentioned Lorenzo Robledo. A stellar line up of genre favourites if ever I saw one.

Ultimately Face to Face works because it is a good story, played by good actors and led by a good director. But it really stands out from the crowd because it is an action film with a real point, in which characters are allowed to develop and change. Moreover it is an action film which sends you home thinking seriously about the use of violence not only in the film but in the wider world around us all.

Retrieved from "https://www.spaghetti-western.net/index.php?title=Face_to_Face_review&oldid=49253"
Category:
Cookies help us deliver our services. By using our services, you agree to our use of cookies.