Fasthand is Still My Name Review 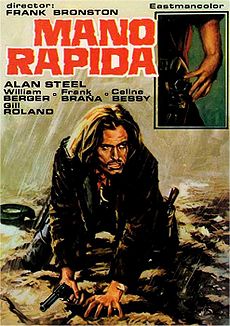 Widely regarded as among the most violent Spaghetti Westerns of all time, Fasthand is Still My Name does indeed live up to its reputation. It was made at a time when westerns weren't popular anywhere. But unlike some cheaper Italian counterparts of the time, this one still features Spanish locations and a black clad gunman. But what it has in the visual department, it lacks in strong characters, plot, and music. In the years directly after the Civil War, bands of marauding Confederates are plaguing Union reconstruction. Captain Jeff Morrison is one of the most respected of the guerilla hunters. However, Machedo and his band of particularly violent rebels kill Morrison's outpost and cripple his gunhand after humiliating him. After some time, he returns to exact revenge on them. But how can he do this with no gun?

The title of this film has led many to believe it is just another cheesy Italian Comedy western. What a shock it must have been after seeing only the first 20 minutes! Within that short amount of time there have been two massacres and two torture sequences, filmed in an extremely graphic fashion. There is one particularly infamous scene where the outlaws ride circles around Ciani (Alan Steel) spitting on him until he's nearly covered with saliva. The violent nature of this film is pretty much the only selling point. And it really is a nasty one. In the torture scenes, people have ink poored down their throat, genitals squeezed, and chests burned by red hot metal poles. And considering the down and dirty look this film has (no doubt both intentional and unitentional), the violence is quite effective in following through with the atmosphere of the film. But like any exploitation film (this one probably can be called that) the plot is very weak. The first 20 minutes move at a very fast pace and I was really enjoying this nasty slice of Spaghetti pie, but when the film starts to have to form some sort of a plot, it all pretty much falls apart. That is until the quite enjoyable finale. Bianchi makes the mistake of jumping ahead in time, past our hero's rehabilitation and simply reintroduces him as a cloaked man who shadows the marauding outlaws who maimed him. And what's worse is that said outlaws' escapades are told in an almost newsreel fashion complete with a narration. But like I said, the film picks up in the nastier parts which are truly effective in both maintaining a dark atmosphere and further villifying the outlaws to a point where the viewer actually rejoices that these mean bastards are killed. Not that I don't like villains losing, it's just that so many Spaghetti villains are either over the top or too suave to be believable.

Another rather large flaw I saw in the film was Sergio Ciani's interpretation of the maimed Anti Hero. He definitely has the outfit spot on. Complete with black shirt, black pants, black hat, black belt, and black cape (not to mention black soul). But his former career in peplum films leaves him looking a tad too bulky for a proper Spaghetti anti hero. Not only that, but he doesn't look mean enough to be acceptable. His thick red hair, 70's moustache and beady eyes almost make him look like a teddy bear (minus the porno-stache). And surprsingly enough, he takes as many beatings as do the villains. You'd think such a bulky guy would give just a little better than he gets. Furthermore, he takes the Anti Hero persona a bit too far and by the end he is beyond coolness and lies dangerously central in the area of wooden. However, what the film lacks in a good hero, it more than makes up for in the villain. William Berger easily steals the show as the sadistic and unbelievably violent Machedo. Of course the performance is way over the top, but in Italy, more is more. And his performance is more theatrical than The Producers. But for every plus, there is a minus. And in this case that is Gianni Ferrio's inappropriately jazzy score. Ferrio had scored Spaghettis before with a jazzy tint (Death Sentence), but that score was predominately Western I'd say. But here, if you heard the soundtrack in a lounge it wouldn't seem a bit out of place. It isn't the least bit Western and is way too smooth for a film as grim as this.

All things considered, I quite enjoyed this one. Yes, it has a weak plot and an unbelievably poor lead, but it's very violent and graphic. Just what the doctor ordered when in certain moods. Not for all tastes as usual but it should be somewhere in the must see Spaghetti list. I watched Franco Cleef's PAL DVD-R. Ok quality and ok sound. I'm not the DVD buff that others are around here so I can't be specific, but as far as I know it's the most widely seen version of the film. --Korano 04:50, 12 September 2010 (UTC)

Retrieved from "https://www.spaghetti-western.net/index.php?title=Fasthand_is_Still_My_Name_Review&oldid=130461"
Category:
Cookies help us deliver our services. By using our services, you agree to our use of cookies.