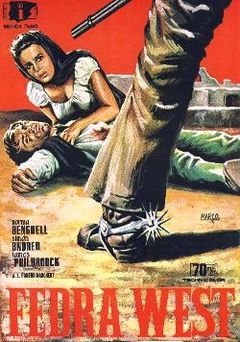 Unlike some other westerns signed 'Marchent', this was not an original project of the Marchent brothers: Joaquin Romero was asked to help a fellow Spanish producer out after an Italian co-producer had withdrawn his money, crew and director. It's a melodramatic western with a flavor of a family drama like Marchent's earlier Sons of Vengeance and Seven from Texas. The new angle was that the story had its origin in Greek tragedy: it's a western version of the story of Phaedra.

The story of Phaedra, a woman who falls for her stepson, is best known for two plays named after her, one by Roman author and philosopher Seneca, the other by 17th Century French playwright Jean Racine. The forbidden love is the result of the wrath of the Goddess Aphrodite, who isn't revered enough by the members of the family. To punish them, she has inspired Phaedra to fall in love with her stepson Hyppolytes, who has sworn chastity. Phaedra is eaten by desire and when Hyppolytes rejects her, she hangs herself, but not before she has written a letter to the boy's father, Theseus, in which she falsely accuses Hyppolytes of having seduced her. Theseus disowns his son, who is mortally wounded in an accident with his chariot when leaving his father's house. When Theseus learns the truth, it's already too late: his wounded son is brought to his room, but dies in his arms.

Of course several story elements were changed for the movie. Phaedra has become Fedra, Hyppolytes is now called Stuart. Understandably there's no resentful Goddess and the love of the older woman is consumed by the younger man. Stuart is the son of a Mexican rancher, Don Ramon, who was sent abroad for his medical studies by his father, because he wouldn't accept Fedra, the woman his father had brought into the house shortly after the death of his mother. Fedra falls in love with her stepson on the very first night after his return, and the two quickly become lovers, not able to control themselves. Stuart finally decides to leave the ranch, but then Don Ramon finds out what had happened and swears to kill his own son. Things lead to a bloody climax in the desert, in a finale that is more reminiscent of King Vidor's Duel in the Sun than any of the plays about Phaedra.

The copy I had to deal with (it was a bit of a struggle) had a running-time of no more than 78 minutes and was in all but pristine state. There were hairs, specks, scratches, vertical lines, you name it; there were also numerous jumps, due to missing reels, and occasionally an entire scene was missing, leading to characters popping up or disappearing without explanation. It's hard to judge the entire movie under these circumstances, but some scenes show this Marchent brother at his best. Apparently the story device of a married woman having an affair with her stepson caused a few censorship problems; for this reason the woman's behavior is 'explained' by her confession, to the son, that she married his father - a man she never loved - to escape from extreme poverty. Her love for the young man, was in fact the first real love she ever felt - he was the first person who made her feel like a woman. It a nice story device, adding depth to both the character and the plot.

Fedra West is no doubt Bengell's movie. Both Andreu (as the son) and Philbrook (as the father) are adequate, but remain in her shadow. According to Marchent, Philbrook was drunk most of the time, but always appeared on the set. It was released under various titles, such as Tragedia al Sol (Spain) and Io non perdono ... uccido! (Italy), but the most common title is Fedra West. A new Italian production company was found after Marchent was contracted, but this is definitely an Iberian production, in execution, style and content, with only marginal Italian input (basically the score and some contributions to the screenplay by Giovanni Simonelli). This has led to a remarkable scene in which a prejudice often expressed in spaghetti westerns is reversed. Spanish audiences were sometimes appalled by the way Mexicans - after all brother people - were presented in Italian westerns: as stupid brutes permanently laughing for no reason at all. The scene in question, shows sophisticated Mexican citizens Andreu and Bengell being harassed in the street by assorted bunch of noisy American roughnecks. Revenge is a dish served laughing. 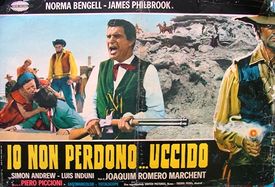 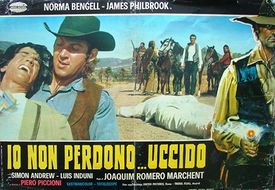 Retrieved from "https://www.spaghetti-western.net/index.php?title=Fedra_West_Review&oldid=107341"
Categories:
Cookies help us deliver our services. By using our services, you agree to our use of cookies.