Three acrobats help to rid a small Californian border town of a local tyrant in the times of the Gold Rush. Lots of flip-flops, flic-flacs and cartwheels in a peculiar combination of slapstick and violence 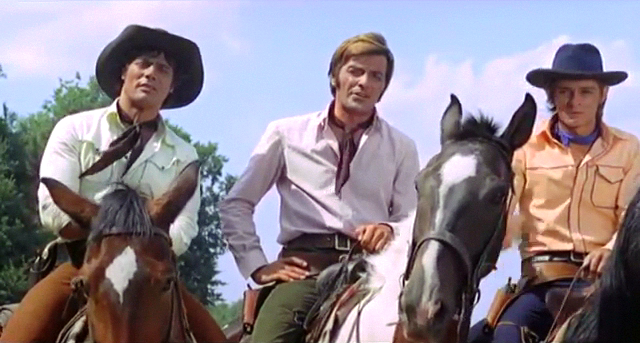 A spaghetti western of the acrobatic type. The members of traveling circus witness a bank robbery in a small Californian border town; one of the robbers is wounded and identified as the son of a local rancher, Parker. The sheriff wants to put him on trial, but he is killed by the boy’s father, who denies all complicity of his son and instead accuses marauding Mexican bandits of the crime. It soon transpires that Parker has heard rumors about a Gold Rush and therefore wants to drive the townspeople away, so he can exploit the local mine and keep all its riches for himself. Three acrobats of the circus decide to help the townspeople in their fight against the local tyrant.

The film has an interesting setting, both in time and space: it’s set in California, shortly after the Mexican-American war (1846-1848) which brought California under American control. The Mexicans who are accused of the robbery, are living in exile across the border. The acrobats eventually enter into an alliance with the Mexicans to rid the town of its cruel boss. This may all sound fascinating, but to say that the movie doesn’t live up to the expectations, would be an understatement. The comedy often verges on slapstick and large parts feel like a kiddie movie, but some of the violent scenes thrown in (for bad measure) are quite nasty: an awful lot of people are killed when the sheriff’s place is under attack (his daughter is the only one who survives the massacre) and one of the miners is brutally tortured - almost beaten to death - by Parker’s men. To add insult to injury some of the violence gets the slapstick treatment: one of Parker’s henchman is branded by the acrobats with a branding iron and the place chosen to mark the man for life is ... yes, his rear end. 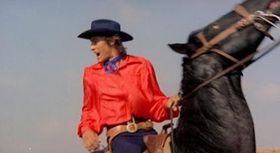 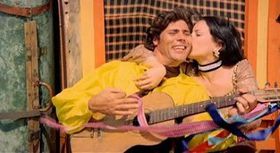 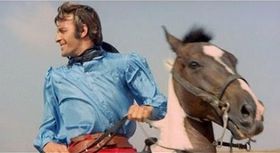 The combination of slapstick and violence is of course not new within the genre; there are similarities to Franco Giraldi’s McGregor movies and it seems to me that some of the action scenes were inspired by Enzo G. Castellari’s Kill Them All and Come Back Alone. The problem is that it’s all done without any sense of style. No score was written for the movie (*1) and the homo-erotic overtones (look at those shirts!) don’t really help. According to Remo Capitani (who plays the Mexican rebel leader in exile) director Albertini had trouble to stay away from the bottle during the production (*2). Thanks to the actors, the movie is not a total dud. It works best during its more light-hearted moments: Spartaco Conversi is good fun as the leader of the circus and Dell’Aqua (the man from the trapeze), Torrisi (the muscle man) and Stella (the glamour boy) make a good trio of acrobatic fighters from Ave Maria; unfortunately they have very little to fight for (*3).

Retrieved from "https://www.spaghetti-western.net/index.php?title=Fighters_for_Ave_Maria_Review&oldid=103181"
Categories:
Cookies help us deliver our services. By using our services, you agree to our use of cookies.