Find a Place to Die Review 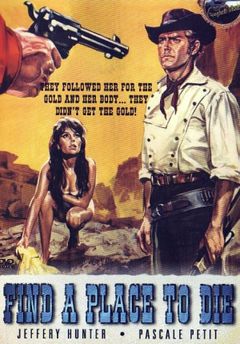 A renegade Confederate soldier, making money across the border as a gun runner, redeems himself by helping a young widow against a gang of bloodthirsty bandits. A minor but interesting genre entry, atmospheric, sexy, well-acted, but a bit short on excitement

An American geologist and his wife have located a goldmine in Mexico but are attacked by the men of El Chato, a bandit terrorizing the region. The scientist wards off the assailants by using dynamite, but this causes a landslide and he gets pinned under a wagon. The woman undertakes a journey to a nearby hamlet, where a seemingly amoral American (an outcast Confederate officer, running guns south of the border) offers to help her. He composes his own gang of Mexicans, but these men are as gold-hungry as the bandits who attacked the couple…

In Holland, Find a Place to Die (View Database Page) was launched with the phrase: A modern action movie, with a dash of eroticism! It has indeed two women in surprisingly active roles, who add a dash of eroticism to the regular spaghetti western action. The film is also unique in the sense that it's entirely shot on location, without a single scene set in a western town. Most exteriors were shot near Manziani, north-east of Rome, a rather green area, that was used more often for spaghetti westerns, but never before to represent Mexico. Cinematographer Riccardo Pallotini makes the best of it, calmly panning his camera over the green slopes and moss-grown rocks of the Lazio hills. A few early scenes are shot in the shade of the ruins of a monastery, and throughout the movie, we’re confronted with ruins of religious buildings, creating an atmosphere of decay, giving the film a distinctive look among the spaghetti westerns. 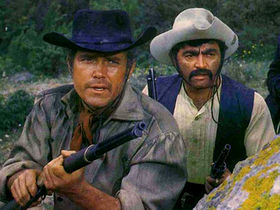 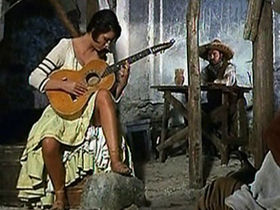 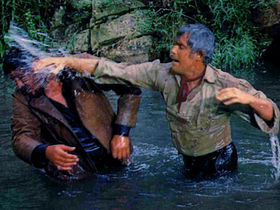 Carnimeo is listed as the only director, but he was supervised by Hugo Fregonese. The script was (loosely) based on an American western, Garden of Evil (1954, Henry Hathaway), which may explain the redemptive, romantic ending with Hunter following the woman – by this time a widow – to New Orleans. Otherwise Find a place to Die has those typical violent antics and anti-clerical sentiments of the Italian westerns of the period. On their way to the mine, the group is joined by a pretended priest, a particular nasty character, who not only handles a six-shooter very well but also knows a lot about torture. The film is well-paced but rather short on excitement. It has good atmosphere, but the script is deceptively plain. The action scenes are competently staged, but the attack on Eagle’s Nest, Chato's hideout, is needlessly protracted. They could've done more with some of the characters, such as a superstitious pimp/gunslinger who shoots vultures because they are messengers of death. Chato's gang is told to be so ferocious that even the bravest men start to shiver when they hear the name, but when Chato is killed and his murderer says he is taking over the gang, only one member raises his voice, all others accept their new boss without any problem! Oh my, what a bunch …

To western fans Jeffrey Hunter is best known as the young man who accompanied John Wayne in the quest for a young girl kidnapped by Indians in John Ford’s The Searchers. Once considered to be one of the most promising actors in the business, his career soon went downhill. He already had serious drinking problems while making this film, but according to Giordano, he never drank on the set (1). He died the next year of the consequences of a skull fracture, caused by a bad fall after having suffered a stroke. He is quite good as the former officer, now a gun-runner south of the border, who’s looking at the world through the bottom of a glass (2). His rugged style and deep voice add a touch of spleen to both the character and the atmosphere: what he’s essentially doing south of the border, is trying to find a place to die, like the beautiful theme song says. The song is performed by the gorgeous Daniela Giordano in the film’s best scene, set in an improvised saloon, in one of those religious buildings that has fallen to ruins. It's a wonderful scene, sweaty, sultry and sexy (3). According to Giordano the scene in the improvised saloon was directed by Fregonese, not Carnimeo (4).

Retrieved from "https://www.spaghetti-western.net/index.php?title=Find_a_Place_to_Die_Review&oldid=114471"
Categories:
Cookies help us deliver our services. By using our services, you agree to our use of cookies.