An American farmer is killed by his Mexican neighbors; a couple of years later five gunmen arrive in town to avenge his death. A good movie from the early days, slow-moving but atmospheric, and with a surprisingly violent finale

Five Giants from Texas (I Cinque della Vendetta, see Database Page) is the first of two spaghetti westerns by Aldo Florio, the other being the much better known Anda Muchacho Spara!. Five Giants from Texas is a sadly overlooked movie from the early days of the genre. The story is set a couple of years after the Civil War. Jim Latimore is a war veteran, who is hated by the Gonzalez brothers because his farm is located in the middle of their vast territory. Latimore has brought new ideas of brotherhood and justice to the valley and has also married the brothers’ cousin Rosita, who has given birth to a son. One night the Latimore ranch is attacked by a bandit called Matanza, who was payed by the brothers: Jim is killed, Rosita is scandalized and their son is brought to the Gonzales brothers, who decide to raise the boy as one of the own. A couple of years later, five men arrive in town who claim to be former friends of the late Jim Latimore; they promise the widow to avenge her husband and bring back her son ... 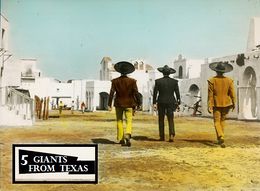 Picking up the central idea of The Magnificent Seven, the movie also copies the deliberate pace and slow build-up to a large-scale, violent finale from Sturges’ classic (most spaghetti westerns had various outbursts of violence throughout the movie) (1). But the director was an Italian, so we also get hypnotizing scenes of gunmen walking towards each other in the streets of a white-washed Mexican town (plus trumpets going crazy on the soundtrack). And note the crucial difference: the five gunmen have personal motives, they're not hired to do an honorable job. Actually there are a few professionals in this movie, but they are not hired by the victims, but by the villains, and their job is all but honorable: the Gonzales brothers pay Matanza (a man who likes killing) to get rid of Latimore.

I wouldn’t call it a hidden gem (some others have) but it’s most certainly an above average achievement. It’s also easily Guy Madison’s best spaghetti western; he’s in fine form as the leader of the magnificent five, the Chris of service, so to speak. The other characters are mere stereotypes (the silent Indian, the young hothead, the disciplined gentleman, the Mexican friend who once let the victim down), but they’re played by an ensemble of stalwart actors. To some the slow build-up and the deliberate pace may be a drawback, but the film has good atmosphere and the protracted shootout near the end is spectacular and well-staged.

Contemporary critics had some reservations in regard to the violence: there are protracted scenes of torture, suggestions of rape and the action is remarkably ‘bloody’ for an early genre entry (most spaghetti western directors were rather reserved in this aspect, hardly ever using squibs to suggest bullet wounds) (2). And then there’s this disturbing scene of Madison going mad: with only one of the Gonzales brothers left, Madison refuses to kill him at once, prolonging his suffering with bullets in the limbs and the groin. It’s a pretty sadistic scene. I also noticed that the depiction of the Gonzales brothers has led to some frowning in Spanish and Latin-American circles; Julio Alberto writes on his blog:

“The prologue (...) contains a message, and I do not know whether it is intentional or not, but it’s a dangerous one: Americans are very good (Latimore treats his workers well and peace and harmony reign on his property) while Mexicans behave like tyrants who have enslaved the peones” (3).

Julio Alberto may have a point here, the depiction of Mexicans in spaghetti westerns was often far from subtle, to put it mildly, but it should be observed that the screenplay was written by two Spaniards - Alfonso Balcazar and José Antonio De La Loma - and it seems unlikely that they acted out of malice; moreover the character of Jim Latimore (the one who brings peace and humanity to the valley) seems modeled after a Spanish nobleman rather than an American rancher. And when Madison is torturing his victim, it’s one of his men, played by Argentine actor Mariano Vidal Molina, who gives him the coup de grace. Vengeance is a dish served with dignity.

Retrieved from "https://www.spaghetti-western.net/index.php?title=Five_Giants_from_Texas_Review&oldid=117573"
Categories:
Cookies help us deliver our services. By using our services, you agree to our use of cookies.