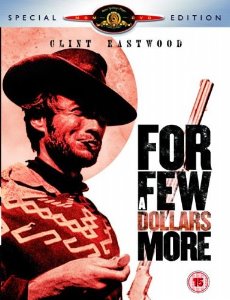 Two bounty killers are after the same man, the psychopathic killer and rapist El Indio. The first is an impetuous young man called Manco, the second a more controlled (and fashionable) army veteran with a stupendous collection of firearms, Colonel Douglas Mortimer. El Indio is about to rob the impenetrable bank of El Paso, a thing only a fool or a complete madman would dare to try. Because El Indio's gang is too much for one man, the two bounty hunters decide to join forces. What Manco doesn't know, is that Colonel Mortimer isn't really interested in the reward money, but has a personal score to settle with the madman ...

To many fans of the genre, this is the archetypical spaghetti western, the film that has all elements that made the genre unique, and some more. Eastwood is once again the laconic poncho-clad gunslinger, Van Cleef adds an element of conscience and revenge to the spaghetti western dish. Morricone's score is perfectly embedded in the movie, not only supporting the action on screen, but taking part in it by means of integrating natural film sounds into the score and adapting arrangements of tracks used more than once, to the context in which they are played: an organ when the action is set in a church, a more predominant trumpet when a scene is set in the open.

This Double DVD has been released in several European countries, including the UK, Holland, Belgium, the Scandinavian countries and France, but not in Germany, where an alternative Double DVD was released by Paramount, using the DD 5.1 soundtrack of this MGM release. You can read Sebastian's review of the German DVD here.

Video: The old single disc MGM release of the movie was not bad at all, but a little soft and lacking contrast in some of the darker scenes. For this new release, the image has been remastered from the original 35 mm print of the movie, resulting in a very pleasing anamorphic transfer. There is some edge enhancement visible and attentive viewers might notice that backgrounds occasionally tend to blur a little, but this has all been reduced to a minimum. Print damage is also minimal and the transfer is nearly completely free from hairs and dirt. In other words: a very good transfer.

Audio: There are no less than four audio tracks, two in English, two in French. All are surround tracks, so the original (English, Italian) mono tracks are not included. I concentrated on the English tracks. Results here are less impressive than on the video front, but we must take into account that the only complete soundtrack available, was an old mono track that was not in pristine condition. Both surround tracks sound a little thin and some digital echo is noticeable throughout. Dialogue occasionally leaks to the front speakers, but this is (by far) not as bad as on the surround track of MGM's The Good the Bad and the Ugly, where it soon became a real nuisance. The DTS track is a little louder and clearer, especially in regard to dialogue and ambient sound. Still, neither of the two tracks is very loud, so you might want to raise the volume a little.

Extras: Although interesting, the extras are a bit of a let-down compared to what MGM's previous Double DVD release of The Good, the Bad and the Ugly had to offer in this aspect. Features like Locations Comparisons and Collector's Gallery (a series of stills from the movie and the filming of it) are a pleasure to watch, but Eastwood's interview is only a short excerpt from a longer one, and it's quite difficult for Chris Frayling to say anything you haven't heard or read before. Sergio Donati confirms the persistent rumour that Eastwood deliberately started to imitate the coarse, slow voice of his Italian voice actor Enrico Maria Salerno, after watching the Italian dub of A Fistful of Dollars. He asks us to compare Clint's voice in both films. I did, and the difference is indeed remarkable. In the featurette on the American theatrical version, we're told that the American distributor cut the film's info about the name Manco/Monco in order to be able to present the film as a 'No Name' sequel.

Until we get a Blu-ray release of the movie (and I'm sure we'll have one soon) this is the definitive release of a genre masterpiece: great image quality, acceptable sound quality. There seems to be some room for improvement on the audio-front, but I'd advise companies to concentrate on improving the mono-track(s), instead of putting their energy in creating fake surround tracks. 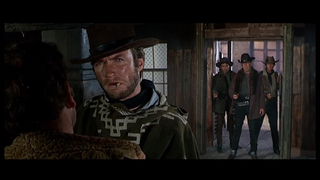 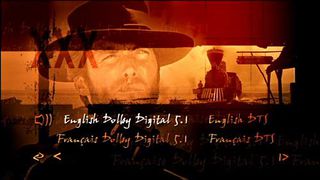 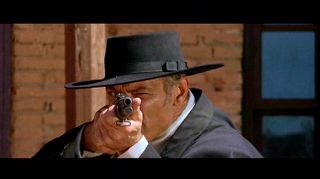