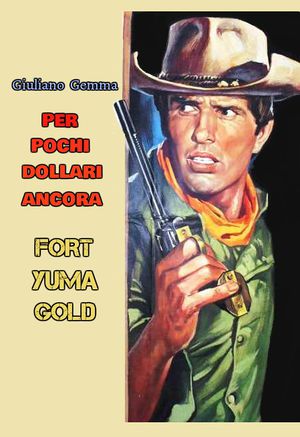 Fort Yuma Gold is the second entry in a loose trilogy directed by Giorgio Ferroni and starring Giuliano Gemma (the other two being One Silver Dollar and Wanted). It's often regarded as the best of the three. The script was loosely based on the novel Michel Strogoff by Jules Verne and the movie is quite unique in its unbiased depiction of Union and Confederate soldiers (Italian western directors usually sympathized more with the South, because just like the Italians in WWII, the Confederacy was on the losing side during the Civil War).

The Civil War is over but one company of die-hard Southerners threaten to attack Fort Yuma. Due to the strong defense of the fort, this would inevitably lead to a massacre. A Confederate POW, Gary Hammond (*1), is sent to the fort with a dispatch; he is escorted by two Unionists, a rude but basically good-natured sergeant (Pazzafini) and a well-mannered but slimy officer (Del Pozo). When they are attacked, the sergeant is killed and Gary severely wounded, but he manages to hide the dispatch in the luggage of a traveling dancer and singer called Conny Breastfull. He is nursed back to health by a veteran of the war against Santa Ana and after his recovery he fulfills his mission with the help of the old man and the beautiful Conny, who has fallen in love with him.

The original director of the movie was Alberto de Martino, but he was replaced by Ferroni after a conflict with Gemma. De Martino was offered the direction of Django Shoots First instead. Enzo G. Castellari was involved in both productions and directed the large scale action scenes of this movie (*2). Like One Silver Dollar, Fort Yuma Gold is set in the aftermath of the Civil War, but this time around Gemma is not an avenger but a saviour. With its elaborated script and fashionable look (the costume design is really impressive) it is one of the more sophisticated examples of the genre. The Italian title, meaning For only a few dollars extra (clearly a reference to Leone's Dollar Trilogy) is a bit odd: the villains are after one million dollar in gold, safeguarded within the walls of the fort. In other words: the stakes are very high.

Gemma's character is less cynical than the average spaghetti western anti-hero: he is not after personal gain but devotes himself to the general interest and gets the girl in the end. The first half - which contains one of the most elaborated saloon brawls in history - is leasurely paced, but once the suicidal attack on the fort becomes imminent, the tension is built up nicely. Gemma is in excellent form and there's chemistry between him and French actress and comédienne Daumier, but the villains are near stereotypes. The score is credited to Ennio Morricone and Gianni Ferrio, but apparently some existing material of the maestro was used to justify his name on the credits (note that by this time Morricone's name was supposed to attract moviegoers!). Anyway, it's a lovely score, the use of the harmonica even anticipating the use of the instrument in Once Upon a Time in the West. Although bursting with action, the film is not particularly violent, making it almost perfect family viewing. Still it is labelled VM 14 in Italy (unsuitable for persons under the age of 14), apparently because of one protracted torture scene in which Gemma is nearly blinded (*3).

Simon Gelten is a long time contributor to the SWDb. "I'm not as old as Tom B. but I'm working on it. I hope to catch up with him by the end of the next decade.", he says. Simon saw all movies by Sergio Leone and several by Sergio Corbucci in cinema, most of the time in Eindhoven, the city where he was born. Currently, Simon is living in Turnhout, Belgium. Simon is active within the database as both Scherpschutter and his alter ego Tiratore Scelto.
Retrieved from "https://www.spaghetti-western.net/index.php?title=Fort_Yuma_Gold_Review&oldid=107471"
Category:
Cookies help us deliver our services. By using our services, you agree to our use of cookies.