Four Artists and a Man with No Name, part 2 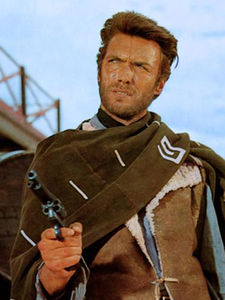 The man with no name

# A Fistful of Dollars

There’s no evidence that Sergio Leone was aware of the social and cultural implications of Yojimbo, he most probably saw it as a cynical, but straightforward and exciting action movie that he could easily turn into a movie of his own. Leone copies the twist added to the story by Kurosawa, but while Mifune recovers in a temple after the torture scene, Eastwood recovers in a mine. In Kurosawa’s vision the temple is part of the endangered classic world he wants to preserve, and the recuperation scene is also a symbolic confirmation of the samurai’s adherence to it. The spaghetti western is decidedly a catholic genre, but Leone, and most directors following his footsteps, were primarily interested in the catholic iconography. He once said that most Italians were Catholics, but didn’t like Church, that is: the Catholic Church. It would therefore have made very little sense to set the recuperation scene in a church or a convent. Leone perfectly illustrates the religious ambiguity by showing Marisol, the woman forced into adultery, with a headscarf to make her look like the Madonna and turn her family into the most elementary Catholic icon imaginable: the Holy Family.

Like Kurosawa, Leone was confronted with the problem that it’s not easy to transport a story from one historic and cultural context to another. Eastwood’s No Name may not be completely amoral, but he is certainly not a person upholding a chivalrous morality. This leads to some complications, for instance in the scene where No Name comes to the rescue of Marisol and her family. The symbolism used by Leone is quite nice, but it’s hard to accept it on plot-level as a motivation for No Name’s actions. For Japanese viewers, the corresponding scene in Yojimbo was an evident underlining of the bushido, but why would a man as ruthless as No Name help these poor people? Of course, he’s human, and most humans would feel sorry for this poor family, but he’s taking an awful lot of risks for them, and we feel that the man with no name, or at least the idea we have of him, wouldn’t do that unless he had a very good reason. It has something to do with the past, with a woman like Marisol, who had similar problems, No Name explains, ‘something too difficult to explain’. A few other problems remain unsolved. In Kurosawa’s movie the relentless rivalry between the families symbolises the decay of the traditional Japanese social virtues, in Leone’s film this rivalry seems irrational: one family into liquor, the other into gun-running, why fighting each other over a ghost town?

Leone did not crave for a bygone society, nor was he, at this point of his career, particularly interested in morality tales; what fascinated him in the story, was the idea of a small town as a lawless micro-universe and the mysterious loner, taking the part of the arbiter between two equally ruthless sides. It’s a grim variation on the classic western idea of the lone gunman riding into the valley, ‘doing what a man ought to do’ and finally riding of alone into the sunset. Leone loved Shane (1952, George Stevens), and the dreamlike picturesque beauty of the film most certainly influenced him, but disliked the near-angelic image of the gunman, which took all menace away from him. The man with no name is all but angelic: he is menacing as hell. In some aspects he comes close to Dashiell Hammet’s idea of the Continental Op as the last man standing after capitalist forces have devoured each other. But Leone had no Marxist sympathies.

Red Harvest and Yojimbo had both been ‘political’ works of art in the sense that they had made a statement about the time and place in which they were set. As an artist Leone was more interested in the human condition than in politics. In A Fistful of Dollars any possible political subtext seems absent. It doesn’t hurt the movie, but some of the scenes invented by Leone and his fellow scriptwriters do. I never liked the massacre scene at the border and the churchyard scene is really awful. However, some of the scenes borrowed from Kurosawa work better here than in the original, like the exchange of the prisoners and (especially) the finale. Kurosawa’s finale is great, but Leone’s version of it is fantastic, one of the best things he ever did. It’s a horrifying dance of death, meticulously orchestrated, repeatedly accelerating and slowing down again, slowly, very slowly progressing – “The heart, Ramon, the heart, you won’t stop me if you won’t hit the heart” - but inevitably leading to a sudden and violent discharge. 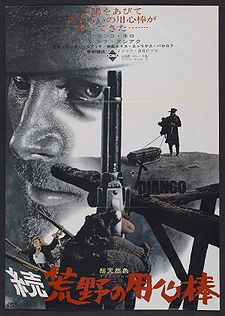 If Leone didn’t have Marxist sympathies, Corbucci did. Therefore it’s no surprise that the political dimensions neglected by Leone, were brought back into the story by the other Sergio, but instead of turning to Red Harvest, he turned to Yojimbo. Both Japan and Italy had been occupied countries, both had met with large-scale corruption and the rise of powerful crime-rings, and both societies had moved into a direction not desired by, respectively, Kurosawa and Corbucci. What Corbucci may have escaped, was that most post-war Japanese artists who were opposed to the ‘Americanization’ of their country, were right-wing conservatives. But, as Howard Hughes put it, Corbucci wasn’t dogmatic, and his films were only the better for it. Left or right, he wouldn’t have bothered, a rebel was a rebel.

Corbucci’s left-wing ideas, go back to the final stages of WWII and its aftermath. In most countries communists had fought against the fascist oppressor, but after the war they were left out of the government. The countries would embark on a strong pro-American (and anti-communist) course, and accept American help (Marshall Plan) to build up the post-war societies. By many left-wing intellectuals this was felt as betrayal and it had created strong feelings of disillusion among them. Added to the fact that the Catholic Church had not been very courageous during WW II, many Italian intellectuals developed strong anti-American and anti-clerical feelings. They would be reflected in many films made in the sixties, among them the spaghetti westerns.

Django is a typical anti-movie: it’s anti-clerical, anti-racist, anti-American. The film’s main villain is a sadistic redneck called Major Jackson, his footsoldiers are dressed like Klansman, but the dominant color is red, not white (well, they hate Mexicans, not blacks). There’s a priest-spy working for the racists, and the religious imagery is daring, often verging on the absurd. It is also strongly anti-Leone. Corbucci still wanted to outdo his rival, and knew he needed a dirtier picture to do so. His anti-hero is therefore a dirtier version of No Name, his town dirtier than the white-washed villages of the Dollar Trilogy. If the violence in Leone’s picture is sadistic but governed, in Django it’s outrageous and profuse; No Name shot four opponents with a pistol, Django mows down dozens opponents with a machine gun.

Corbucci wanted his anti-hero to look like a wandering samurai and for this reason, he was denied a horse. He enters the movie walking, in worn-out clothes, carrying his equipment on his shoulders; like Chris Frayling noticed, this makes him look like a contadino, a poor Italian farmer, on his way back home from the fields. Django is, in other words, the working class anti-hero from the spaghetti western. And if he became a cowboy without a horse, he became a man with a name, even if it wasn’t a regular one. He was named Django after the legendry jazz guitar player Django Reinhardt. The name further defined the character as a social outcast – Reinhardt had been a gypsy – but also links up nicely to the famous cemetery scene, with Django balancing his gun with his crushed hands on a metal cross. The crushed hands are usually – for good reasons - interpreted as references to both Jesus and Che Guevarra (who’s chopped-off hands were sent to Fidel Castro after his death), but note that Django Reinhardt had a mutilated left hand: the third and fourth finger were paralyzed as a result of an accident that had happened when he was 18 years old; he had refused surgery and doctors thought he would never be able to play the guitar again, but he had learned afterwards to play all chords with only two fingers.

The differences between Django and Fistful perfectly illustrate the differences between the two most important directors working within the genre of the spaghetti western. Leone’s art is sophisticated, austere in its own exuberance, Corbucci’s art is frantic, ingenious its riotousness; Leone prepared his movies meticulously, he was more interested in setting up projects, in preparing and conceiving movies, than in directing them; Corbucci virtually had no live outside directing and his films usually took shape on the set. While trying to stay closer to Yojimbo, Django deviates more from its source than Fistful. Django is more colourful and more unpredictable than Fistful, but it’s also less coherent and less distinguished. In the end it’s primarily a matter of taste which one of the two movies is the better one. Both A Fistful of Dollars and Django are milestone movies, of crucial importance for the art of film making. Our lives would have been different without them.

Retrieved from "https://www.spaghetti-western.net/index.php?title=Four_Artists_and_a_Man_with_No_Name,_part_2&oldid=140203"
Categories:
Cookies help us deliver our services. By using our services, you agree to our use of cookies.