Four Candles for my Colt Review 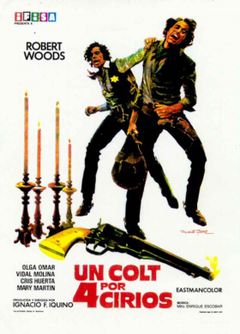 Four Candles for my Colt

This must be one of the weirdest spaghettis in history. Robert Woods is the sheriff, Chris Huerta the corrupt town boss. There’s also a stagecoach robbery, an evil widow, a galvanic halfbreed, a catfight and even the cavalry. In other words: This film seems to have it all, but somehow they managed to blow it (almost completely)

Four Candles for my Colt (Un Colt por 4 cirios, see Database Page) is a late spaghetti western of the (more or less) serious kind. It has a promising start: A group of bandits rob a stagecoach and subsequently spend the night in town, where the man who masterminded the robbery, town boss Mr. Arnold, throws a party in the local saloon (annex whorehouse). One of them, a man called Farley, steals the loot while the others are celebrating, but he’s found dead the next morning. It was no secret that Farley’s second wife Beltha was unfaithful to him, so Arnold and his men reckon she ordered her lover, Rogers, to kill her husband and hide the money in a safe place. In the meantime the local sheriff has started his investigation and there’s also Farley’s daughter Geminis, a galvanic halfbreed who hates her evil stepmother and wants to avenge her father ...

The premise seems to offer more than enough complications for a spaghetti western of the treasure hunt type, full of twists and turns and changing alliances, the more so since the cast looks very promising, but somehow they managed to blow the whole thing - or nearly so; half of the movie seems to consist of fisticuffs or people who can’t make up their minds shouting at each other and pushing each other aside; characters often make a deal and fall out again within one and the same sequence. This must be one of the most hyperactive movies ever made; even the usually very disciplined Bobby Woods seems electrically charged as the sheriff who’s desperately trying to get at the bottom of things. He inspired the infamous Thomas Weisser to one of his most spectacular literary eruptions:

Woods gives an amazingly animated performance …. Constantly touching or hitting everything and everybody. He has a crazed semblance, as if he might start tearing apart the scenery at any moment, without notice. A very strange sheriff. (1)

A very strange sheriff indeed, and a very strange movie. One of the weirdest things in it, is the appearance of a long-legged Afro-American lady, dressed in a corset and garters, wearing a tray with drinks and cigars around her neck. She’s part of Mr. Arnold’s retinue and pops up every now and then, even in the middle of nowhere. While watching the movie I had the idea that the whole thing was made up on the set, but apparently the script was based on a novel - albeit a dime novel - by a certain Lou Carrigan (real name Antonio Ramirez), a very prolific Spanish author active in various genres such as mystery, crime, romance and western. According to Julio Alberto on his (Spanish language) blogspot the source novel used for the movie was not a western, but a gangster story, with cars and Tommy guns instead of horses and six shooters (1).

There are a few good ideas, such as the widow hiding the money in the coffin that’s supposed to hold her husband’s corpse (a nice nod at Corbucci’s The Hellbenders) and once more Bobby Woods shows us how quick he was on the draw (it would be interesting to know if he was quicker than Glenn Ford, who could draw in 0.4 seconds, faster than John Wayne or James Arness (3)). The halfbreed daughter and the evil step mother also have a pretty good catfight. Overall the second half of the movie is a bit better than the first, but instead of the expected (and desired) shootout we get a never-ending fistfight between the sheriff and the treacherous Rogers and (believe it or not) the Cavalry coming to the rescue. What the hell were they thinking of?