Four of the Apocalypse movie review 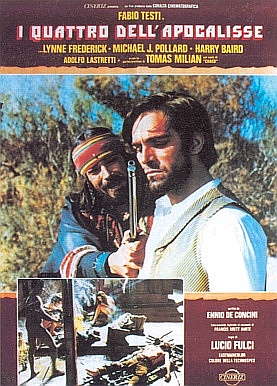 Stubby Preston (Fabio Testi) arrives in Salt Flats, Utah, 1873. He is immediately thrown in the jail by the marshall (Donald O'Brien.) The jail is populated by the likes of Bunny, a prostitute (Frederick), Clem the drunk (Pollard), and Bud the crazy (Baird). That night, the town's vigilantes, disgusted by the drunken habits of the other people, decide to put a stop to all this drunken disorder once and for all. A massacre ensues and the next morning, the four prisoners are set free and start to travel the wilderness in search of a home and their own destinies.

This film, to begin with, is very violent. However, there are very few gunfights to showcase this violence. The film prefers a slower, more allegorical pace to establish the characters and create the surreal feeling. What also makes this film very interesting is the fact, when you think about it, that it is a road movie. But instead of motorcycles or cars, there is a wagon. This is not completely noticeable. The film is rather episodic because of the road movie structure. The group encounters several others in their journey. Including the likes of Chaco. A friendly drifter who asks to travel with the group. He collects food for them and defends them from the law. But the moment he starts skinning people you start wondering what kind of person he really is. I recently have interpreted this film in a way I had never thought of before. I call it a "Pre" Spaghetti Western. Many of the spaghettis that feature something like revenge as a main theme, first show why and how the anti-hero is seeking revenge and how he became so violent. It is generally because of a vicious and violent act perpetrated against him, or a loved one, by a naturally violent man. But to exact this revenge, the character must fill his heart with hate to became the ruthless killer and to ultimately exact his revenge. But scenes like this, where we are given the reason, are usually featured in the beginning or a flashback and are therefore kind of footnotes. However, in this particular one, the reason why is not a footnote. In fact, it is the whole movie. That is what makes it so moody and atmospheric. It is about the circumstances and violence that make men into violent killers. At first, Stubby Preston is a dandy of a gambler, but because of the violence he is confronted with, in the form of Chaco, he has to fill his heart with hate. Only at the very end of this movie does he actually turn into the violent killer featured in most spaghettis. For those who haven't seen the film, there are unavoidable spoilers coming up. And he is sort of an amateur. As Shobary points out, he holds a pistol with a double-handed grib to steady his hand. He has definitely never killed anyone before, but because of the hate he feels, he kills Chaco and his men without very little hesitation. He even taunts and tortures Chaco a bit before killing him. He then rides away to become most likely a tragic and violent anti-hero in the mold of Django. But, instead of an unrealistic moniker, he is simply Stubby Preston. 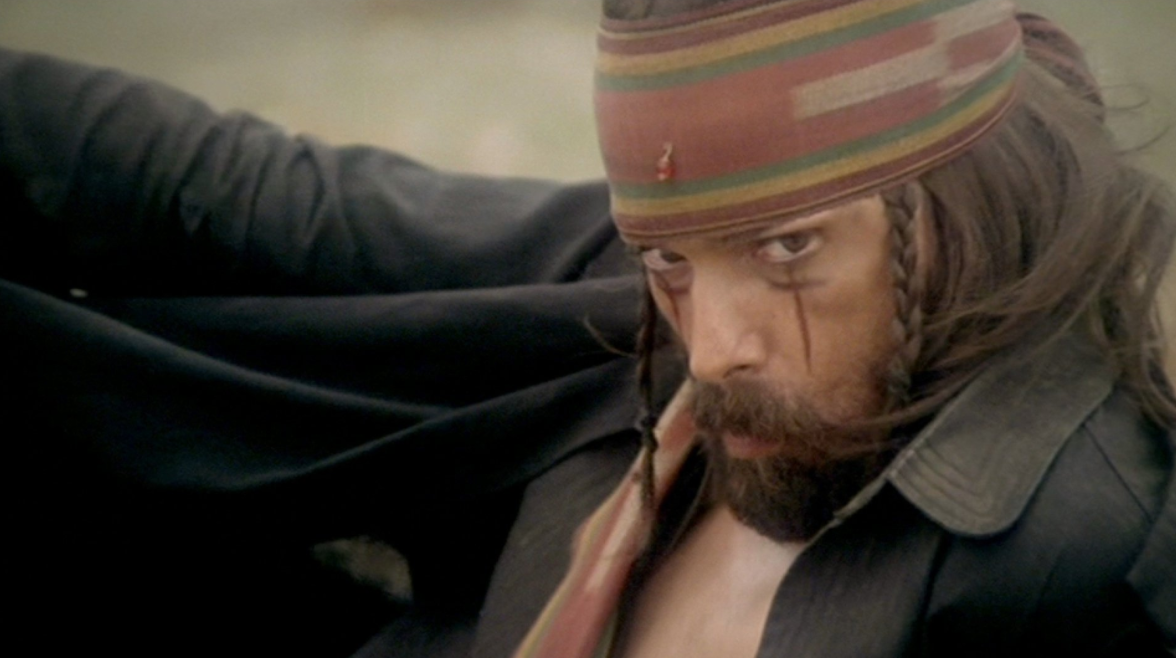 Lucio Fulci does a great job as director of this epic film. I have no hesitation in calling it that. It shows a darker, more realistic image of the west but still has the spaghetti never never land aspect. Fulci clearly shows a deep love for this film. It appears more than a "work" project but more a labor of love. He fills it with his trademark violence but without overdoing it. In many ways, this is an art film. As I stated earlier, he takes character development more seriously than he does action scenes. Does a great job at creating the Chaco character, a true sadist. And not far removed from Charles Manson. He develops a great atmosphere in this film. Bleak and violent. Very emotionally realistic. Great directing.

The acting is also great. It is a real shame that Fabio Testi is dubbed by an inferior actor. Doesn't match his looks and almost ruins Testi's acting at important scenes. But I believe Testi himself was very good. Lynne Frederick is not great but is acceptable. Who really stands out are Michael J. Pollard and Tomas Milian. Pollard does a great job as the drunk. He is awakened with a bucket of water and immediately checks the drips on his mouth to check for alcohol. He shakes his head with disappointment. He is even willing to get down on his knees and howl like a dog for a drop of whiskey. Even letting Chaco spit it into his mouth. Not to mention drinking all of Stubby's after shave! Milian is truely evil. Very deceitful and violent. He drugs the group with peyote so to overpower them so he can rape Bunny. At his death, he cries and whimpers in pain. Completely without dignity. Until he is shot by Stubby. I think it a shame Harry Baird doesn't get enough screen time. He could really have been a very entertaining character.

The music by Bixio, Frizzi, and Tempera is definitely not for all tastes. It is full of Folk rock sounding pieces that illustrate the obvious. If I were the subject of a movie, they would probably be singing about me typing right now. However, near the end, there is a beautiful, lyricless piece, almost identical to the final piece from Pat Garret and Billy the Kid. I rewatched the scene to re-experience the magical feeling it gave me.

Definitely not for every taste. I believe it is definitely a mood film. If you are in a very allegorical and surreal mood, this is your movie. Beautifully made but sometimes slow. Even if I say it is not my favorite film, I hold this film in the highest respect. It is very different and beautiful. Four of the Apocalypse.

Retrieved from "https://www.spaghetti-western.net/index.php?title=Four_of_the_Apocalypse_movie_review&oldid=132064"
Category:
Cookies help us deliver our services. By using our services, you agree to our use of cookies.