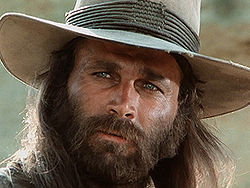 Franco Nero, whose real name is Francesco Clemente Giuseppe Sparanero, was born November 23, 1941 in San Prospero and grew up in Parma, Italy. As a child he loved it to take small roles in theaters, later he organized small performances in his school. He studied Economics in Milan when he shot his breakthrough movie Django with director Sergio Corbucci. Now Franco Nero is one of the biggest Italian movie stars. His genius and on-screen presence has lead to many imitators. His success lasts on till today where he starred in many Hollywood productions as well. He is married with the British Actress Vanessa Redgrave, and in 1969 they had a son, Carlo Gabriel Sparanero (known professionally as Carlo Nero). Franco Nero is one of the last living icons of 60s Italian film.

Retrieved from "https://www.spaghetti-western.net/index.php?title=Franco_Nero&oldid=136650"
Category:
Cookies help us deliver our services. By using our services, you agree to our use of cookies.