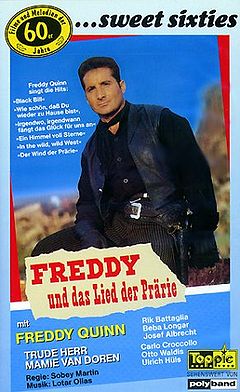 Along with Italian born Caterina Valente and fellow Austrian Peter Alexander, Freddy Quinn was one of the most successful entertainers in the German speaking world of the second half of the 20th Century. He sold over 60 million records, had 10 number one hits in Germany (only The Beatles did better with 11) and appeared in 19 movies, most of them musicals, in which he often played a sailor coming home after a long journey abroad. When the Karl May movies broke all the records in Germany, he also had to make a western.

In the movie Freddy is simply called Freddy, but he’s also Black Bill, a sort of vigilante who defends the simple folk against villains and land grabbers. He has been away from home for years, looking in every corner of the West for the murderers of his father. In his absence, the ranch of his uncle Ted is attacked by bandits who are after the old man’s gold. Freddy’s cousin (and love interest!) Anita applies for the job of the deputy of Moon Valley, in order to be able to investigate the case herself. When Freddy (not dressed in black) arrives in town, she thinks he’s a trouble maker, and wants to throw him in jail, but then he shoots a hole in a silver dollar: only one man can shoot like this (no, not Giuliano Gemma): Black Bill!

The Karl May movies were no doubt the motive to make it, but the movie was equally influenced by Raoul Walsh’s rousing western spoof The Sheriff of Fractured Jaw (Mamie van Doren replacing Jayne Mansfield). With its collection of sketches and songs the movie often feels like a series of vaudeville acts. The action scenes are lousy, the jokes pretty lame, and the scripting ridiculous. While his parents, living near Moon Valley, are said to be killed by the Moon Gang, this idiot Black Bill starts roaming the West instead of looking in Moon Valley (or shooting local saloon owner Rik Battaglia on the spot - who else could be the villain in a German western movie?). That said, the film has a few entertaining moments on vaudeville level. Quinn is not a great actor but he’s a good singer and Mamie sets the screen (and the saloon) on fire with a deliciously corny & horny song partly sung in Yankee German:

Director Sobey Martin was of German descent and had directed a few episodes of Rawhide and Gunsmoke, but when he arrived on the set, it soon became clear that he spoke little or no German. Some think Italian actor Croccolo directed the lion’s share of the movie, others think Quinn did most of it himself. Apparently he was a real pain in the ass who had complexes about his stature (he’s very small) and therefore asked others to bend the knees in order to look smaller (*1). 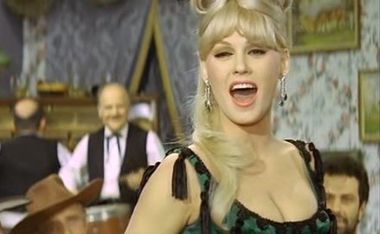 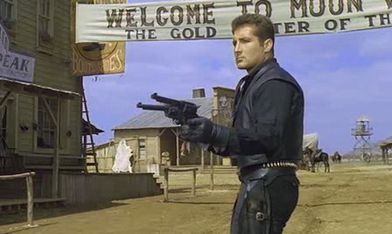 He was sometimes called the German Elvis, but his style is closer to Dean Martin. His biggest hit, Heimweh (Homesickness), was a German version of Martin’s Memories are made of this. It remained five months on top of the German charts, still a record. Other megahits were Junge komm bald wieder (Oh boy come back home soon) and Die Gitarre un das Meer (The guitar and the sea). He also had a smash hit with his version of the traditional La Paloma. Quinn was born in Austria, in a small village north of Vienna. His father was Irish and after the divorce of his parents, the young Freddy followed him to the US, but he later returned to Europe.

Quinn was discovered in a bar in Sankt-Pauli, the harbor district (also harboring the Red light district) of Hamburg. As an artist, he would adopt the image of the eternal wanderer, most of his songs are about loneliness in a faraway land. They may sound a little schmaltzy today, but they were written within the context of a post-war German society and a country that was looking for a new identity. His career suffered from the rise of rock music but he continued performing and inspired new generations of Schlager singers. Till Lindeman, lead singer of hard rock band Rammstein, once admitted that the deep voice of Freddy Quinn had been a major influence. Although he sang in other languages, he never became a real star outside the German-speaking world, but he seems to have an Irish fanclub.

Retrieved from "https://www.spaghetti-western.net/index.php?title=Freddy_und_das_Lied_der_Prärie_Review&oldid=107463"
Categories:
Cookies help us deliver our services. By using our services, you agree to our use of cookies.