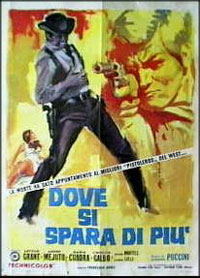 The Western has plundered the works of William Shakespeare regularly through the years. Possibly more than any other genre. And many of its most celebrated auteurs have had a go at adapting the bard's works into a sagebrush setting. Anthony Mann, William Wellman, Delmer Daves and Edward Dmytryk are good examples of how it was done in America and of course Enzo G. Castellari's Johnny Hamlet is a prime case in Spaghettiland. It's not surprising then that when communist intellectual Gianni Puccini decided to have a crack at an oater he should fall back on Old Bill's work to use as a starting point. This was a smart move as the tragic themes and characters which have helped keep Shakespeare's works so relevant and vibrant to this day fit the western genre like a glove and provide any film maker with a happy balance of action and drama to work with. This raw material still has to be used thoughtfully of course to make it interesting and that is what sorts out the men from the boys. Happily, Puccini does so capably here and Fury of Johnny Kidd proves to be a real pleasure as a result.

Romeo and Juliet is the play being adapted in this instance, with the Mexican and Gringo families of the Mounters and Campos filling in for the Montagues and Capulets of the original. The main principles of the storyline remain intact for the most part; The two families ongoing hatred and antagonism of each other manifests itself in murder and ambush during which both sides show themselves as bereft of any sense of restraint or mercy. The Campos, and in particular the eldest son Rodrigo (Peter Martell) are seen to be particularly ruthless in their endeavours and they are also aided by the complicit assistance of the local sheriff (Piero Lulli). Meanwhile Johnny Mounter, (Peter Lee Lawrence playing the Romeo part), meets Giulietta Campos (Cristina Galbo) while robbing a stagecoach with his one handed friend Lefty (Andres Mejuto) and takes an instant shine to her. They are expecting the coach to be carrying some treasure belonging to The Camposes and while they don't find any loot the beautiful young maid qualifies as far as Johnny is concerned. The pair meet up again during a raid Johnny makes on the Campos' ranch during which Senor Campos announces his daughter's betrothal to Sheriff Cooper. Giulietta is none too pleased with this arrangement and once an opportune and secret clinch takes place with young Johnny the couples' mutual infatuation is complete and their minds made up to be together. On learning of this the local saloon girl Roselyn (Maria Cuadra), who has enjoyed a previous brief encounter with our handsome hero, blows their story to Rodrigo in a fit of jealousy. Johnny is subsequently captured and jailed but Roselyn takes pity and affords his escape; sacrificing her own life in the process. The stage is now set for a final showdown as Johnny attempts to free Giulietta from her father's house and the Mounters embark on an all out assault on their enemy's stronghold. In Shakespeare's original of course the young couple's love is doomed by circumstance and the depth of their families' animosity. They can be together only in death. Will this retelling in the arena of popular cinema allow such a tragic denouement? 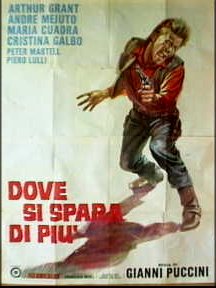 As in all good adaptations Puccini and his scriptwriters Bruno Baratti and Maria del Carmen Martinez Roman use the original text as a general structure but are not chained to it slavishly. The central themes and characters are maintained but they are happy to adjust things and play around with ideas in order to construct something fresh from the material. Retelling the same story in different costumes is not enough to make it interesting and it is no surprise that Puccini and his team are clearly set on making the story their own and embellishing it with some quirky twists and nuances. And quirky twists there certainly are. For a start the bond between Sheriff Cooper and Rodrigo Campos has homo erotic overtones that even my pathetically inadequate gaydar could pick up on. This is an unspoken element but the flashback image of them shooting at each other while Rodrigo is lying on a bed and the resultant relic of the bond which now exists between them (two bullets wedged point to point together in a bizarre and obviously phallic symbol), makes this abundantly clear even if, thankfully, the two men are not portrayed as anything other than fiercely masculine in any other context.

The character of Roselyn is also utilised cleverly. Instead of the old flame merely refered to in the original play as a girl who resists Romeo's advances, she is introduced here as a significantly more ardent rival for our young man's affections. She is thereby able to play the pivotal role of rejected lover, exposing the couple to Giulietta's family while also offering a tragic 'whore with a heart' figure that Westerns like so well. Moreover, as the saloon singer, she sets up the purveying mood of the entire film with her haunting lament of "La Muerte Esta Con Nosotros" ("Death is With Us"); by far the most effective saloon song I have ever heard in a Western. No skirt twirling and thigh slapping in this one. The song oozes a sense of tragic resignation and introduces Death himself as a character as present in the film as either Romeo or Giulietta. His presence purveys every scene and, uniquely to my knowledge, he finally appears in person at the end of the closing bloodbath, complete with skeleton face, cooly picking off any wounded survivors with cruel precision.

And that denouement I mentioned earlier? Well no, Puccini takes a different tack on this altogether. The original play ends with the understanding that the purity of Romeo and Juliet's love could not survive amidst the deep rooted, blind prejudice and hatred of their families. Shakespeare chose to kill off his young lovers to symbolise this impasse. Puccini takes a different tack entirely on the scenario, choosing rather to kill off everyone else (literally) in order to put an end to the madness and allow a new beginning based on love. It is both a more positive and a more gruesome conclusion but one which I think works well within the context of the piece and the Spaghetti genre itself.

Fury of Johnny Kidd is an impressive film for a director who only made one western. Puccini's tragic death aged only 54 the following year meant that we will never know if it was a feat he could have repeated. What we can say is that he assembled an impressive creative team for this film and, as a result, it offers more than the average oater of its time while still delivering a satisfying genre feast. Cinematographer Mario Montuori (later to work on Ciak Moll and Forgotten Pistolero) produces some great work here, with some beautifully constructed visuals and the aforementioned scriptwork of Baratti and Martinez Roman means the dialogue is by and large free from some of the cornball excesses all too common at the time. Gianni Amelio's contribution as assistant director is always difficult to guage but his later celebrated career would suggest he didn't do any harm and his similar role on Giulio Questi's Django Kill suggests that he was a very useful player in the team. Gino Peguri's score is effective and, in places, memorable but for me was damaged by the unneccesary use a sort of sliding stylophone effect at times.

Finally, the cast was a good one and used very well. For me this is one of Lawrences best performances, almost the perfect part for his looks and screen persona. He is convincing as the young romantic hero and in hindsight bears an uncanny resemblance to Leonardo Di Caprio who was to play Romeo in a more recent and well known version of the story. Lawrence also enjoys an obvious chemistry with Cristina Galbo and it is interesting to note that the couple were actually married a couple of years after meeting on the set of this film. Galbo is fine as Giulietta but her thunder is stolen in the female stakes by Maria Cuadra who is both sexier and more effective in the role of Roselyn. Piero Lulli is perfect in the role of Sheriff Cooper with his mad blue eyes while Peter Martell is given carte blanche to play Rodrigo with as much open shirted, virile abandon as he liked.

In total Fury of Johnny Kidd is a very solid slice of spaghetti pie and a first rate adaptation of this Shakespearian tale. Everyone involved does a creditable job and the end result should please any of us who enjoy their pasta with a classical flavour.

The version I watched of this was the first class recent release from Koch Media who continue to bless us with excellent presentations of previously hard to find films. The italian audio and english subs are nice and should satisfy anyone but the most subtitle-phobic while the picture quality was clear and vivid and in its original 2.35:1 aspect ratio.

Retrieved from "https://www.spaghetti-western.net/index.php?title=Fury_of_Johnny_Kidd_Review&oldid=140501"
Category:
Cookies help us deliver our services. By using our services, you agree to our use of cookies.