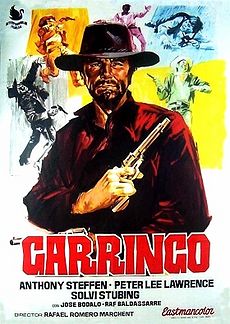 As a young man, Johnny witnesses the killing of his Army deserter father at the hands of a detachment of soldiers sent to bring him in. Johnny is adopted by Sheriff Klaus and his family. He grows up to be a hate filled outlaw with a specific dislike of military. He hides his lawless life from his family who know him only as a good boy. In response to his crimes, the army sends Lieutenant Garringo to capture or kill Johnny. 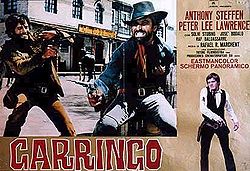 Garringo is the type of Spaghetti Western that is hard to not like. There is nothing about it to set it apart from the rest. It isn't a classic. And probably not the type to crack any top ten lists. But it's simple, fast paced, and action packed. With a little more thorough characterization. This is how it goes for most of Rafael Romero Marchent's Spaghetti output. His films are often very routine but very enjoyable. And Garringo is no different. But it seems to be the most popular among Marchent's mainstream western output.

One reason I liked the film is that there are two main characters who are given about equal focus. And they are not partners. In fact, they are against each other. But both are treated equally by the script. Johnny, though, clearly is the antagonist, he is also given features that more pertain to the anti hero. He isn't the over the top, Fajardo-esque villain. His character and motivations are given detail so you can actually sympathize with the villain. But of course his actions are that of a villain. Garringo is given no such detail. He is the obvious Anti Hero of the film. The one we all end up rooting for (unless you're the type that roots for the villains). 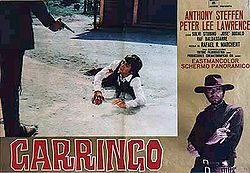 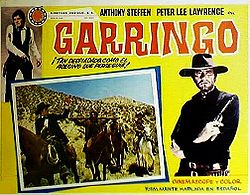 The first 30-40 minutes of the film are very fast paced. But it gets a little slow in the middle and I found myself losing interest a bit. But it picks up towards the end. This isn't the type of Action Spaghetti that has 2 or 3 big action scenes. It peppers its action aspect throughout the film to keep the pace going. But like I said, there is a pause in the middle to advance the story.

The talent in front of and behind the camera is of course the Spaghetti Western regulars. Rafael Romero Marchent was no stranger to the genre and made several films like this. Simple but effective. Marcello Giombini, Marchent's regular composer, delivers the goods here. A nice catchy theme tune is played throughout. Genre stars Anthony Steffen and Peter Lee Lawence are both in top form here. Steffen, as we all know, divides the community as does PLL. But as a person who usually likes Steffen, I'd say he does what's expected of him and does it well. He's a dry, cold, killing machine. PLL on the other hand is a bit different than usual as the colorful villain. Playing both good guy and bad guy convincingly. Though I admit that I've never been a fan of him that much (though he doesn't bother me too much).

For any Spaghetti fan, this is a must see. It's routine but in a good way. And it will satisfy just about everyone's taste in Spaghetti.

Retrieved from "https://www.spaghetti-western.net/index.php?title=Garringo_Review&oldid=97046"
Category:
Cookies help us deliver our services. By using our services, you agree to our use of cookies.