Garringo Review aka Dead Are Countless 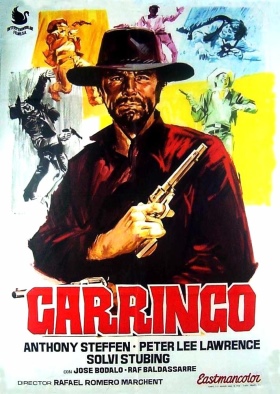 Garringo. This flick is violent and sadistic, no way around that. This film comes on strong and does not let up on the carnage until the end credits roll. There are no heroes in this film, a compassionate few, but just mainly a bunch of psychopaths of varying degrees who spread hate and perpetrate mental and physical abuse upon the people they come in contact with. Young Johnny (A. Lawrence-as child) sees his military desterter father shot down by an army officer for the crime of "high treason." Johnny is taken in by a man he calls Uncle Klauss and his daughter Julie, Johnny is given love and guidance by his uncle and a happy home. But the childhood trauma of seeing his father shot down, drives Johnny (Peter Lee Lawrence-as adult) mad, and as a young adult he goes about shooting down army officers and soldiers, tearing the lapels from the officers uniforms as had been done to his dad, the lapels are then placed on the marker at his father's grave. Johnny also after killing the officers sends the colonel at Fort Collins telegrams that say "Lieutenant dead, Sincerely Johnny," blatantly baiting the colonel to react. The colonel desires to make Johnny a example and wants him captured alive, one man can get the job done, that man's name is Lieutenant Garringo (Anthony Steffen), who is incarcerated at a military prison but is released by the colonel to capture Johnny and bring him back alive.

Why Garringo is in prison is never addressed ("Garringo was supposed to bring in three men but ended up killing them. He's in prison for their murder. I don't know if this was mentioned in one of the European releases and not interpreted into the English version or if it was cut out of the English language version"-Tom Betts), but he is without a doubt a psychopath on the level of the deranged Johnny. Garringo goes to find and capture Johnny, he goes to the town where Johnny sent the last telegram from and starts to follow the clues and leads to find Johnny' s whereabouts. Garringo beats and half drowns the dead lieutenants girlfriend Sarah and then uses some barbaric violent means to find out more and further his investigation. He places his rope around one of Johnny' s accomplices neck and throws him around the bar he finds him in, and that's just for starters, what he does to the Bill ([[:Category:Frank Brana|Frank Brana) character has to be seen to be believed. Johnny has returned to see his uncle and Julie, and wait for his friends to meet there for a planned gold robbery of an army transport. Uncle Klauss is now the sheriff of the town of Bell city, which he explains to Johnny that nothing ever happens there, it's a job for an "old fogey." Garringo who had taken a severe beating from the Bill character, but still has enough consciousness to oft Bill, makes it to the way station, where he collapses, and is nursed by Julie until he's recovered somewhat, Klauss questions Garringo after Johnny told him his friend Bill had been killed, Garringo tells Klauss that he's after Johnny and means to take him back to stand trial.

Johnny enlists Fred (Jose Moreno) and Damon (Raf Baldassare) to help him rob the gold transport, a bounty hunter rides into Bell city and is also involved in the chaotic ending, the finale unfolds with more death and destruction, all the nasty loose ends are tied up, but the outcome is a fitting end to this ultra violent horse opera. Peter Lee Lawrence does a fantastic job of conveying a man who at times is seemingly a caring individual, until the mental illness takes over him and he uses violence to get his way. Anthony Steffen is also engaging and while he has that dead stare as he does in many of his other spaghetti Westerns, in this one though his dead looking stare seems to indicate a man who is dead inside, possibly because of his own violent tendencies. The uncle/sheriff Klauss character is the most compassionate and caring character, he blames himself for the way Johnny turned out telling Garringo about young Johnny' s obsession with guns, "practicing shooting was the only thing that mattered to him, some deep purpose must have been pushing him, like he was afraid someone was chasing him."

When Garringo is interrogating and torturing two of the three men In Johnny' s gang and the dead Lieutenants girlfriend, Garringo uses water on all, possibly as a religious symbolism for the confessing of their sins, through a baptism, but no salvation for the men as they are disposed of with a gut full of lead. The movie also has no mature female characters, the mother's of Johnny and Julie are never shown or discussed, a man's world, where the young and pretty women survived, but no motherly figures. The boy out for revenge for a parent or parents death when he grows up has been used many times in western films, though most effectively in the spaghetti western genre in the Lee Van Cleef, John Phillip Law spaghetti western DEATH RIDES A HORSE (1967, Italy). The director Marchent would revisit the theme of murdered parent or parents as is the case in the second film on this disc TWO CROSSES AT DANGER PASS.

The cast is outstanding, led by a fine performance by Peter Lee Lawrence (Karl Hyrenbach), he would appear in a number of Spaghetti Westerns before his untimely demise at the tender age of 30, on April 20, 1974. Lawrence is best remembered for his participation in the films FOR A FEW DOLLARS MORE (1965, Italy, Spain, W. Germany), AWKWARD HANDS (1970, Italy, Spain) and KILLER CALIBRE 32 (1967, Italy) and KILLER ADIOS (1968, Italy, Spain) both released by Wild East Productions. Anthony Steffen is best remembered by spaghetti western fans for his role of Django, in DJANGO THE BASTARD (1969, Italy), Steffen appeared in many Spaghetti Westerns including BLOOD AT SUNDOWN (1965, Spain, Italy), SEVEN DOLLARS ON THE RED (1966, Italy, Spain), GENTLEMAN KILLER (1967, Italy, Spain ) and SHANGO (1970, Italy). The director Rafael Romero Marchent does an excellent job of keeping the film moving and setting a brutal tone and not backing down. The film is beautifully framed and the locations and camera work are first rate. Marchent director many spaghetti Westerns that are known for their no-nonsense approach, that were all macho testosterone filled films, they included the films DEAD MEN DON'T COUNT (1968, Italy, Spain), SARTANA KILLS THEM ALL (1970, Italy, Spain), AWKWARD HANDS (1970, Italy, Spain) and PREY OF VULTURES (1972, Italy, Spain, France). The fine nuanced score is composed by the prolific Marcello Giombini, and is one of this reviewer's favorites.

The print of this film is stunning, a major accomplishment in the quality and presentation of this film. The Wild East guys have done an outstanding job on the restoration of this film and it has never looked better. The colors are spot on and the audio is synched and no audio hiss to speak of. All this in region 0 and in English, be still my spaghetti western loving heart. This presentation is such a joy, that I found myself watching bits and pieces of it the next day after its initial viewing, which is something I never do. If you miss this release you are missing something special, add in the second film, the hard to find film TWO CROSSES AT DANGER PASS and you have one of the best releases so far this year by any company in any genre of 2016. The extras include an interview with the director, in which he gives the details on a fight that involved his brother, the director, writer Joaquan Luis Romero Marchent and Klaus Kinski on the set of one of his brothers movies he was directing. A fascinating interview with the great director. The other extras are the English trailer, German trailer and picture gallery.

Thanks as always to the spaghetti western expert Tom Betts for his help on this review. Look for my review of the Wild East release TWO CROSSES AT DANGER PASS, comin soon to the SWDb...*

Article written by Michael Hauss, author of several reviews for Monster magazine, We Belong Dead, Multitude of Movies, Divine Exploitation and blogs that includes Multitude of Movies, Theater of Guts and the SWDb. He has a love of film with particular interest in the Spaghetti Western and Horror genres. Michael lives in the United States where he resides with his daughter and their two cats Rotten Ralph and Fatty boo-boo.
Retrieved from "https://www.spaghetti-western.net/index.php?title=Garringo_Review_aka_Dead_Are_Countless&oldid=104568"
Category:
Cookies help us deliver our services. By using our services, you agree to our use of cookies.