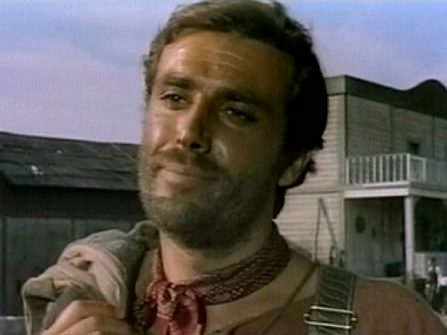 George Hilton got into film acting in the mid-1950s, and acted in spaghetti westerns in the 1960s and '70s, such as Any Gun Can Play, A Bullet for Sandoval, Who's Afraid of Zorro and I Am Sartana, Trade Your Guns for a Coffin (Fistful of Lead).

Born Jorge Hill Acosta y Lara on July 16, 1934 in Montevideo, Uruguay. Hilton began his career as an extra with bit parts in several South American films in the mid-fifties. In 1967 he appeared to great effect as ‘The Stranger’ in Any Gun Can Play with Edd Byrnes and Gilbert Roland. He went on to become one of the major stars of the Spaghetti Western era, eventually playing ‘Sartana’ in the last film of the series I Am Sartana, Trade Your Guns for a Coffin when Gianni Garko left the part. Besides westerns Hilton appeared in giallo films and in more conventional crime, horror and action films when the Spaghetti Western craze ended. Although not active after 1999, George appeared in the 2007 film Natale in crociera.

Documentary: George Hilton - The World Belongs to the Daring

Retrieved from "https://www.spaghetti-western.net/index.php?title=George_Hilton&oldid=138186"
Category:
Cookies help us deliver our services. By using our services, you agree to our use of cookies.