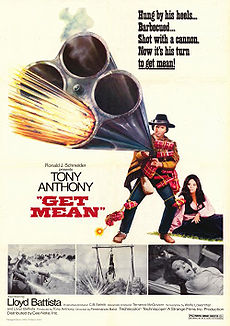 The Stranger is offered $50,000 to escort Princess Elizabeth Maria de Borgos, heir to the Spanish throne, back to Spain. However, Spain is not how the stranger invisioned it. It is full of Barbarians, Moors, and magic! As usual, he is beaten but returns. But to combat his foe, he has to GET MEAN!

The most unusual Spaghetti Western. Although not as weird as Matalo!, it is far more off the wall, and unbelievable. This was the last film in the Stranger series and obviously the weirdest. Although it can be stupid, it is very fun and imaginatively made. It is excessive to say the least. A lot of fantasy elements and comedy. Can be interpreted as a comedy but the finale is too violent and vicious to be fully considered one. As I said in the Stranger page, this one features the stranger with his biggest arsenal ever. Four-barreled shotgun, tons of dynamite and bow and arrows. This film appears to be shot with a large budget. Large scale battle sequences, outlandish costumes and sets, and great pyrotechnics. However, a Westerns All'Italiana interview suggests otherwise.

The acting is great. Many critics don't like Tony Anthony's acting but I think he is a superb actor. In the first two stranger films, he shows his deadpan sense of humour and his own interpretation of "strong" silent type. In this one, he ventures out a bit. Yelling a lot more and a lot more confused. Lloyd Battista is magnificent as a Shakespeare imitating hunchback. He can be sly, treacherous, kind, and vicious. Very convincing performance. Raf Baldassarre is the Barbarian king. He overacts tremendously. But that is easily overlooked by the fact that this is a spaghetti western. David Dreyer is also great. Overacts, yes, but still convincing as a conniving, back stabbing, homosexual. He is Tony Anthony's real life brother. Diana Lorys doesn't have much screen time but there is nothing wrong with her performance. It is those stupid eyebrows she has drawn on that is so irritating.

The music by Franco Bixio, Fabio Frizzi, and Vince Tempera is not for all tastes but I find most of the tunes catchy and enjoyable. There is a irritating comedy banjo theme that plays a lot but that is the only flaw in the music. These three also created the Four of the Apocalypse soundtrack. They did a great job with the Carambola soundtrack which can be heard on a Fistful of Pasta.

The directing is not top notch but good. All the strangeness sort of distracts you from the directing. But Baldi does a pretty good job at directing. Always keeps the pace fast and easily followable. He directs the action scenes well but the battle sequence is a little amateurish. He tries to put you right there in the battle but showing a battle scene with a hand held camera is not always the best choice. Hard to make out who is who when he goes up close. He does, however, direct the film's climax well. Full of action and explosions. Also, a very graphic death scene is shown. Anthony and Baldi were very vicious with their villains.

A great film. Definitely not for all tastes but if you want some dumb fun, this one is definitely for you. 4/5

Retrieved from "https://www.spaghetti-western.net/index.php?title=Get_Mean_Review&oldid=97563"
Category:
Cookies help us deliver our services. By using our services, you agree to our use of cookies.