Never before available on home video, the thrilling final adventure in the hugely successful “Stranger” series finally hits the streets on October 27th. Painstakingly restored in HD from the original camera negative, the GET MEAN 2-Disc Blu-ray + DVD Limited Edition by Blue Underground comes loaded with over 2 ½ hours of Extras, bonus collectible booklet, and special packaging!

Here is an exclusive peek at the GET MEAN Cinefamily post-screening Q&A with Tony Anthony:

When an American cowboy stumbles upon a gypsy family in a wind-swept ghost town, they offer him a fortune to escort a princess back to her home in Spain. But this silent Stranger finds himself in over his head (and strung up by his feet) when he gets caught in the middle of an epic battle involving Vikings, the Moors, brutal barbarians, evil spirits, a raging bull, and a diabolical Shakespeare-quoting hunchback. Tired of their never-ending attempts to kill him, the cowboy arms himself to the teeth with guns, dynamite and a special surprise. Now it’s the Stranger’s turn to GET MEAN! 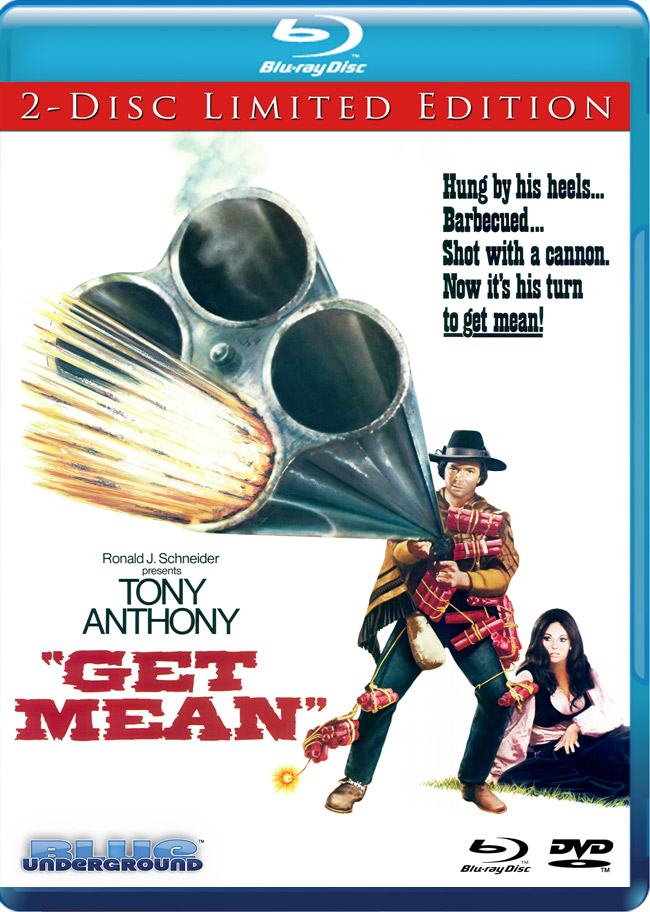 This very rare and unique Spaghetti Western is now available for the first time ever in North America! It comes from a brand new High Definition transfer from the original camera negative. The Get Mean Blu-ray features Full 1080p HD Resolution and DTS-HD Master Audio for the ultimate home theater experience. It’s an exclusive 2-Disc Blu-ray + DVD Limited Edition that comes loaded with Extras, bonus collectable booklet and special packaging.

Retrieved from "https://www.spaghetti-western.net/index.php?title=Get_Mean_celebrates_home_video_premiere&oldid=112599"
Category:
Cookies help us deliver our services. By using our services, you agree to our use of cookies.