Get a Coffin ready is unique among the movies that tried to capitalize on the popularity of the Django character in the sense that it was meant to star Franco Nero, the one and only. In 1966 Nero had signed a contract for three movies for producer Manolo Bolognini, Django being the first, Texas, Addio the second, and this one the third. But then, all of a sudden, Nero decided to go to Hollywood to play Camelot. Director Baldi proposed Terence Hill as the replacement killer, drawing attention to the fact that he looked like Nero's younger brother. Hill was still rather unknown and when Baldi showed a photo of Hill dressed up as Django, Bolognini thought Baldi made a practical joke. In '67 Nero clearly was the star and Hill the lookalike. Half a decade later, after Trinity had made an international star out of Hill, he would be the real thing, while Nero would be cast repeatedly in comedy westerns as a Hill lookalike. One of life's little ironies ...

The working title was Viva Django! and producer Bolognini, cinematographer Enzo Barboni and screenwriter Franco Rossetti had all been involved in Corbucci's groundbreaking movie (*1). The movie itself is neither a real sequel nor a real prequel. Django's wife is killed, but not while he is fighting for the Union (far, too far away). In this movie Django is a professional guard of money transports, who is betrayed by a former friend (Frank) who has turned to politics. Tired of his line of work, Django wants to settle down with his wife Lucy in California, but their convoy is attacked, and Lucy killed, by Lucas (Eastman) and his men, who work for Frank. Several years later, Django is preparing his revenge, working as a hangman who saves the lives of the people he is supposed to execute. In this way, he hopes to assemble a private militia of men faithful to him, in order to face his enemies and their numerous henchmen. But when he has turned his back, to save the woman of one of his men from being hanged, the very man double-crosses him ... 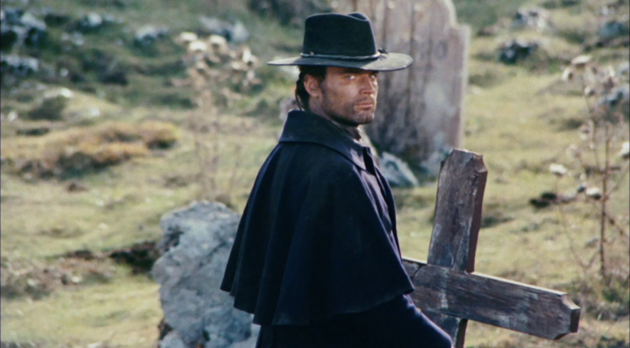 Black clad, with heavy make-up to give him a dirty look, Hill is very much the spitting image of Nero but as an actor he less convincing in transmitting the idea of a tormented hero, a man whose life has been ruined. The idea of a western hero assembling a private army is of course not very original, and it also seems to betray the idea of Django being a loner, but it works well, creating a possibility for screenwriters Rosetti and Baldi to season an otherwise trite revenge story with a few extra twists and double-crosses. There's also a nice reference to A Fistful of Dollars with a Holy Family that is not so holy (but the treacherous father is redeemed in the final moments). Horst Frank is as mean as ever and George Eastman does a good job as his well-dressed but lethal right hand. During the production, Eastman fell in love with Barbara Simon, who plays the wife of José Torres in the movie (*2). All those familiar faces of the supporting actors will give you the feeling of a reunion with lots of old friends.

Get a Coffin Ready is a modest, fairly unpretentious production, unlikely to crack many people's Top 20, but it's easy to enjoy. The grand finale on the cemetery (described as a 'deus ex-machine gun') feels a bit forced - it's Django movie, so we need a cemetery and a machine gun, don't we? - but it's well executed. For cinematographer Enzo Barboni this would be the last western he shot for producer Bolognoni: he was already preparing his own career as a director, and would become world famous as the director of the Trinity movies in the years to come. The score, by Gianfranco Reverberi is a special one. He used a theme written by Ennio Morricone for Le Pistole non discutono and was forced to credit him for this. Nearly four decades later, in 2006, Gnarls Barkley used a piece of the score for his smash hit Crazy (1). Reverberi himself said he had trouble to recognize his own music, others were more categorical.

Simon Gelten is a long time contributor to the SWDb. "I'm not as old as Tom B. but I'm working on it. I hope to catch up with him by the end of the next decade.", he says. Simon saw all movies by Sergio Leone and several by Sergio Corbucci in cinema, most of the time in Eindhoven, the city where he was born. Currently, Simon is living in Turnhout, Belgium. Simon is active within the database as both Scherpschutter and his alter ego Tiratore Scelto.
Retrieved from "https://www.spaghetti-western.net/index.php?title=Get_a_Coffin_Ready_!_/_Viva_Django!_Review&oldid=107492"
Category:
Cookies help us deliver our services. By using our services, you agree to our use of cookies.