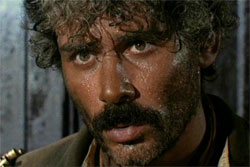 Gian Maria Volonté acted in just a few spaghetti westerns, but his high-profile roles brought him worldwide recognition, playing Ramón Rojo in A Fistful of Dollars and then topping that as El Indio in For a Few Dollars More. He acted opposite Thomas Milian in Face to face and led a gang of bandits as El Chuncho in A Bullet for the General.

Volonté was born April 9, 1933 in Milan, Italy. He studied in Rome at the National Dramatic Arts Academy and started acting on stage and in television in the 1950s before getting into movies. He went on to many acclaimed roles, including the mafia drama, Investigation of a Citizen Above Suspicion, which won the Academy Award for Best Foreign Film in 1971, and The Death of Mario Ricci in 1983, for which he won the best actor award at the Cannes Film Festival. He also won best actor at the Berlin Film Festival in 1986, in Il caso Moro, a crime drama about the Red Brigade. At the Venice Film Festival, he was given a Golden Lion for career achievement.

Volontè died from a heart attack on December 6, 1994, in Florina, Greece, during the filming of Ulysses' Gaze by Theo Angelopoulos. He is buried on Isola della Maddalena, Sardinia.

Retrieved from "https://www.spaghetti-western.net/index.php?title=Gian_Maria_Volonte&oldid=122655"
Category:
Cookies help us deliver our services. By using our services, you agree to our use of cookies.