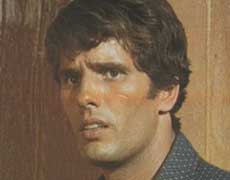 Italian actor Giuliano Gemma was born in Rome on September 2, 1938, but spent part of youth in Reggio Emilia, in the north of Italy. When he was playing in the fields during WWII, he found a device that exploded in his face, causing several wounds, one of them still visible as a scar on his left cheek. Sports have always been a passion of his. At the age of twelve he started gymnastics, when he was sixteen he turned to boxing and even today, at the age of seventy, he practices swimming, horse-riding, parachuting and mountaineering. But it was his second passion, cinema, that would make him famous.

As a child Giuliano knew most Italian and American actors by name and imitated them when he was playing with his friends. His favourite actor was Burt Lancaster. He had his first acting experience as a nameless actor in commercials and got his first contract in Cinecittà  as a stuntman in peplum movies. Like many Italian stuntmen, he was also used as an extra in Hollywood productions shot in Cinecittà . In Ben Hur he can be spotted as a Roman in a bathhouse scene. In 1960, on the set of Messalina, he meets and befriends second-unit director Duccio Tessari, who would give him his first leading part, in Arrivano i Tartari (1962) and would also direct both Ringo movies, A Pistol for Ringo (1964) and Return of Ringo (1965). Still in '64-'65 he made two guest appearances in the Angelique series, romantic adventure movies set in 17th century France. The films flirted with melodrama, but they were lavishly produced and immensely popular all over Europe (other actors who made their appearance in them were Jean-Louis Trintignant and Robert Hossein).

The immense success of the Ringo movies, and of the western he made in-between, One Silver Dollar, made him one of the most popular actors in the business and granted him lovely knicknames like Il Pistolero Nazionale, Faccio d'Angelo (Angel Face) and ˜Il Re dello spaghetti western (King of the Spaghetti western). He was usually cast as a character halfway between Hollywood and Cinecittà , a lethal but clean-shaved and well-dressed rascal, who usually got the girl in the end. The second Ringo movie, Return of Ringo and One Silver Dollar, also helped to define the so-called 'Ulysses type' revenge westerns, one of the most endurable sub-genres in the history of the Italian western. Set in the aftermath of the Civil War, they were concerned with the troubles of war veterans to build up their lives in a post-war society, a theme with strong emotional connotations to Italian moviegoers. One Silver Dollar was the first of a loose trilogy he made with director Giorgio Ferroni, the other two being Fort Yuma Gold and Wanted. Michele Lupo's Arizona Colt ('66) was a slightly more 'dirty' version of the first Ringo movie: Giuliano is as good-looking and well-dressed as ever, but his character is a mean lean bastard. The movie clearly was an attempt to change his image, like the intense Long Days of Vengeance and the ambitious Day of Anger (in which he was cast alongside Lee Van Cleef) were attempts to widen his range as a western actor. Giuliano was still the King, but his reign was coming to an end. After Sergio Corbucci's Django Franco Nero would take over as Italy's most popular western star.

Some people have suggested that he would've been a more logical choice for the Trinity movies than Terence Hill: he was far more athletic and had more talent for comedy. But apparently he never was in the running for the part. But some of the movies he made in the second stage of his acting career, were Trinity inspired buddy movies, such as Alive or Preferably Dead, and Ben and Charlie. He was also cast alongside Bud Spencer as a replacement for Hill in several action comedies. All in all this was not a lucky period: he was still popular among the masses, but the critical reception of his movies was lukewarm at best. But he made a glorious come-back as Italy's leading man of western movies during the (relatively short) period of the so-called Twilight Spaghettis, in films like California and Silver Saddle.

Along with Franco Nero and Terence Hill, Giuliano Gemma is one of the most successful Italian actors of the spaghetti western genre. Even in Italy he is primarily considered a western actor, even though he appeared in most other movie genres, and his most critically acclaimed performance was that of a soldier in the art-house movie Il Deserto dei Tartari (1976, Valerio Zurlini), for which he received the prestigious Davide di Donatello award. He was also awarded at several international festivals for his performance in Pascale Squitieri's Il Prefetto di Ferro (1977). He also played Robin Hood in L'Arciere di Sherwood (1970). In daily life Gemma is known as a very nice person, but he could be quite demanding on the set. For Arizona Colt he (and director Lupo) fired nearly the entire crew of the Spanish production company, so a new (French) company had to be found to finance the movie. On several occasions he called for his friend Nello Pazzafini because he was not satisfied with the stunt men he had to work with. Another personal friend was Sergio Leone, but remarkably he never worked with him. This is often mentioned as one of the reasons why he never really cracked the American market. Both in Europe and the Middle East his popularity fluctuated over the years, but in Japan he has always been a superstar. In an interview added as an extra to the French releases of the Ringo movies, his daughter Vera tells about a trip to Japan, where on every street corner her father was stared at and women nearly fainted when they caught a glimpse of him. Gemma gave his name to a clothing line of a renowned Japanese Fashion House, and the company Suzuki introduced two types of scooters carrying his name, Suzuki-Gemma. He remained active as an actor, but mainly for television.

Few people knew that Giuliano Gemma even had a third passion. On his own website, he tells how he used to work with clay and wood when he was a child and how a hobby became a real passion when he had become an actor. Between movies he used to study in the famous studios of the great maestri d'arte from Firenze and Rome, and in the course of the years he has established his name as a sculptor with a series of exhibitions in major Italian cities.

Giuliano Gemma died following a car accident near Rome, October 1, 2013. He was taken to a hospital in Civitavecchia but died shortly after his arrival. He is survived by his second wife, Baba Richerme, and two daughters, Giuliana and Vera. 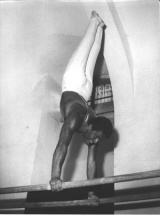 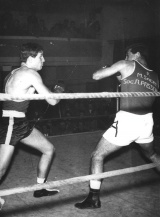 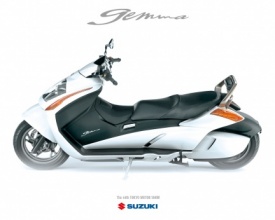 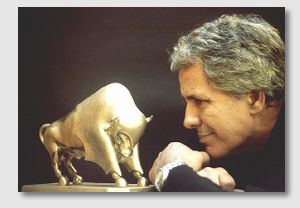 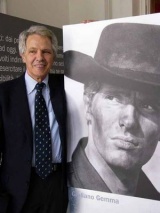 Retrieved from "https://www.spaghetti-western.net/index.php?title=Giuliano_Gemma&oldid=122654"
Categories:
Cookies help us deliver our services. By using our services, you agree to our use of cookies.