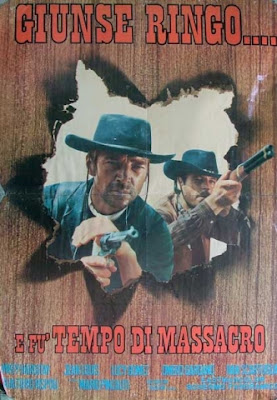 Ringo comes to a Mexican village, searching for his brother from whom he has heard no news. He comes with a sheriff who immediately has work on his hands, as those who get killed are certainly too many.

Mickey Hargitay mysteriously disappears from the film about a quarter of the way through. In reality he flew home to California when he heard his son Zoltan was mauled by a tiger at Jungleland during a publicity shoot for his wife Jayne Mansfield. He was replaced by Jean Luis and the story was changed to his brother Ringo investigating the mysterious disappearance of Mike.

Retrieved from "https://www.spaghetti-western.net/index.php?title=Giunse_Ringo_e..._fu_tempo_di_massacro&oldid=126123"
Categories:
Cookies help us deliver our services. By using our services, you agree to our use of cookies.