Director Edoardo Mulargia and screenwriter Vincenzo Musolino had both worked on Perché uccidi ancora?, but this was their first real collaborate effort. It was also the first spaghetti western of Dutch actor Roel Bos, playing as Glenn Saxson, who - like some will notice - doesn't ride a horse during the entire movie. Producers thought he had a great face for westerns, but discovered that he wasn't a great horseman (*1). In his second spaghetti western, Django shoots first, he would do some horse riding, so I suppose he quickly took a few lessons after finishing this movie. 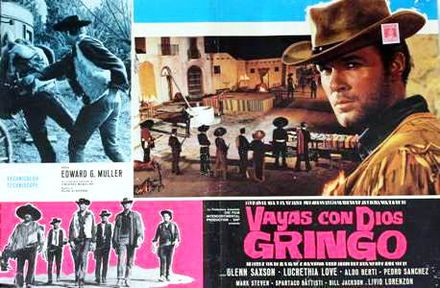 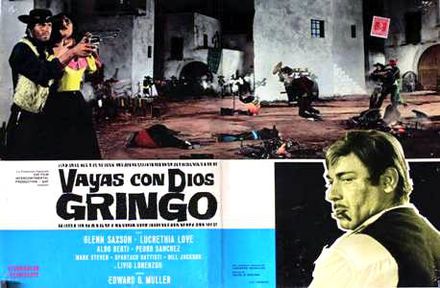 It has been suggested that Mulargia & Musolino (who also plays the villain) were trying to present a spaghetti western version of John Ford's Stagecoach. Saxson is thrown in jail for a crime he did not commit (the murder of his brother) and escapes with his friend Mexico (Pedro Sanchez, as ebullient as ever) and four other inmates, among them Aldo Berti (as deranged as ever). They take the stagecoach (but not to Lordsburg), get into trouble, kidnap a lovely señorita, are attacked by Mexican bandits, and have an explosive card game. The stagecoach thing is bookended by the story of Saxson clearing his name: in the opening scene we witness how his brother is shot by Musolino and his men, in the protracted finale he gets even with the piece of vermin by annihilating the entire gang.

Some have sustained that Vayas con Dios (*2) had the potential to be a minor classic in the line of Mulargia's own (in)famous La taglia è tua... l'uomo l'ammazzo io (El Puro). I don't know, it is enjoyable, and it does have some potential, but Mulargia is a hit-or-miss director, who often hits and misses in one and the same movie. The opening scene is good (and Musolino has an excellent face for villainous roles in spaghettis) and there are a couple of neat ideas (like Spalla planning to take revenge on the rooster who woke him up every morning at four o'clock, befriending the animal instead), but many scenes seem needlessly protracted - and that for a movie with a running time of no more than 80 minutes!. We also get a rather silly scène with the stagecoach passengers fighting off an attack by Mexican bandits with the help of dynamite. With Saxson playing a good-natured, chivalrous guy who must clear his name and gets the girl in the end, the movie has some of the easygoing charm of Giuliano Gemma's early outings. Felice Di Stefano's music is nice, but Morricone is never far away. 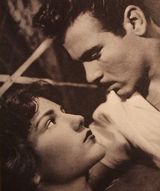 Vincenzo Musolino (1930, Benestare, Reggio Calabria) seemed destined to become a fisherman, but one day director Renato Castellani saw the young man working in the harbor and thought he had the right looks to appear in his next movie, Due Soldi di Speranza. The film was shown in Cannes and shared the first price (the Palme d'Or was only 'invented' a couple of years later) with Orson Welles' Othello. Vincenzo appeared in several movies directed by famous directors such as Vittorio De Sica and Pietro Germi, but never as a leading man. In the second half of the sixties, he tried to re-launch his career by scripting and appearing in a couple of spaghetti westerns directed by Eduardo Mulargia; before his premature death in 1969 (on his 39th birthday, May 9) he directed two westerns himself: Chiedi perdono a Dio... non a me and Quintana.

Retrieved from "https://www.spaghetti-western.net/index.php?title=Go_with_God,_Gringo&oldid=112165"
Categories:
Cookies help us deliver our services. By using our services, you agree to our use of cookies.