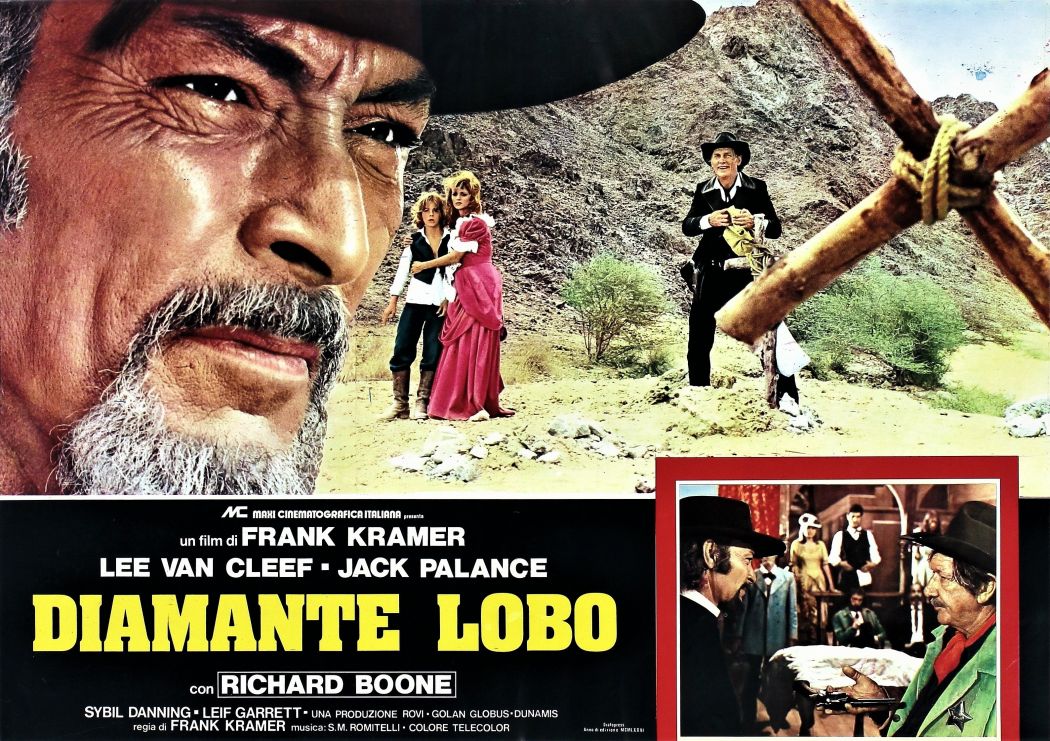 To start with, here is a western movie that many critics don't hold in very high regard among the vast canon of mid 70s spaghetti cinema. Ultimately, it's not as bad as its often portrayed and is a rather late yet entertaining entry to the genre, aside from it being Lee Van Cleef's penultimate spaghetti western. With its distinct European look (actually shot in Israel rather than Almeria) and its sometimes amusingly-staged shootouts, it co-stars Jack Palance as the villain (much like spaghetti westerns such as The Mercenary and Chato's Land) and young star Leif Garret. 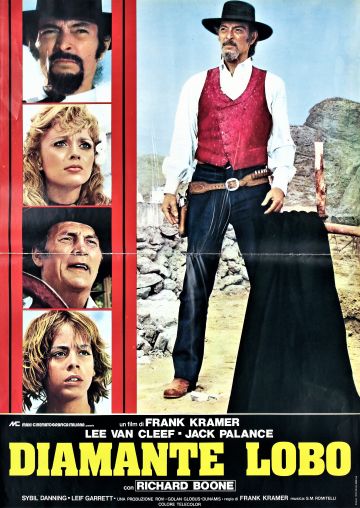 Director Gianfranco Parolini does the same thing with Van Cleef in God's Gun (1976) as he did with him as the lead actor in Sabata (1969) and Return Of Sabata (1971), in that Van Cleef is the laconic hero dressed in black who is loaded with tricks, an idea much like his first spaghetti role as the Colonel in Sergio Leone's For A Few Dollars More (1965). In God's Gun, his dual characters may not have the gadgets and trick rifles that he had in the other two films, but the combat tricks used for dispatching the bad guys are still in place.

The film begins with an outlaw gang led by Clayton (Palance) riding into the town of Juno City, raping and pillaging. Nobody is killed, fortunately, but the townspeople are terrfied and helpless with a coward for a sheriff (western legend Richard Boone), so the young boy named Johnny (Garret) who owns the saloon with his mother, goes to fetch his uncle who is Father John, the local priest (Van Cleef). Father John is soon able to track the bandits down to their camp and disarm them, he then takes them back to face trial, but the yellowbelly sheriff cannot bring them to justice and so after more raiding and terrorising the town they eventually gun down Father John outside his church, leaving young Johnny to escape the mayhem and go off to Mexico with the bandits in pursuit, in search of John's brother, gunfighter Lewis (Van Cleef again).

From this point on, the violence really ensues, beginning with Johnny outwitting and killing two gang members who are following him, then, of course, revenge and retribution comes to Juno City when he finds Lewis and eventually returns with him to clean the place up. The film can be noted for a graphic rape sequence of a saloon girl by one of the bandits during a saloon orgy scene. Lewis appears soon after dressed as the slain priest to make the outlaws pay, and the outlaws' last stand against Lewis in the town is a scene containing some very violent and funny moments, leading up to the final confrontation between Clayton and Lewis after Clayton kidnaps Johnny and his mother and takes them out into the desert. These final scenes are where the plot takes an unexpected twist and makes for a very good tension-filled face-off. 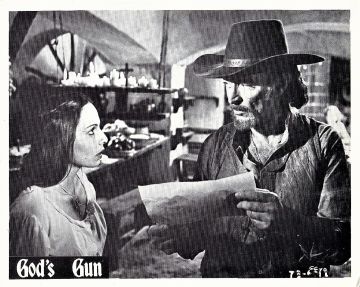 The only bad things about the movie that I can see are some bad editing which makes certain scenes look a bit silly and fake such as the scene where Lewis appears behind the bandits in the church and disarms them, the editing makes it go on too long and takes the fun out of the set-up, slightly. Lee Van Cleef's Father John wig ranks among the worst ever wigs worn in a spaghetti, alongside Tomas Milian and Benito Stefanelli comprising the three worst. The music is good in places and creates the spaghetti feel, yet really starts to get annoying after a while.

Probably the best available version I can recommend to get is the one this review is based on, the mid-priced MGM UK region 2 DVD, which offers a good sharp picture quality, widescreen presentation and a decent range of subtitles in various languages. There are no extras on the disc however.

In my opinion, God's Gun is not a bad spaghetti western and I would recommend it given the features I've described. It was a valuable addition to my personal spaghetti collection and fans of the genre will love it!!

by Tuco the Terrible

Retrieved from "https://www.spaghetti-western.net/index.php?title=God%27s_Gun_Review&oldid=132526"
Category:
Cookies help us deliver our services. By using our services, you agree to our use of cookies.