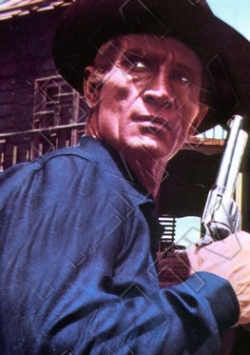 Gordon Mitchell was a United States actor who was born Charles Allen Pendleton in Denver, Colorado, on July 29, 1923 and died in Marina Del Rey, California, on September 20, 2003.

He was one of the American bodybuilder-actors who migrated to Italy in the wake of Steve Reeves, finding work first in peplum, then in Spaghetti Western. From the early 70's onwards, his career started to diversify into everything from horror (Dr. Frankenstein's Castle Of Freaks) (1974), Nazi exploitation (Achtung! The Desert Tigers!) (1977), Sexploitation (Porno-Erotic Western), (1979) and post-apocalyptic films (Endgame), (1983). Mitchell appeared (as Hector) in the bizarre 1982 Israeli adaptation, directed by Avi Nesher, of H. Rider Haggard's She which also starred Sandahl Bergman (as She). Mitchell has also appeared in Satyricon, (1969), directed by Federico Fellini.

Mitchell was close friends with fellow American expatriate actors Richard Harrison, Mike Monty (he appeared in a number of films with both and shared an apartment with Monty in Italy during the 60's), Mickey Hargitay, Dan Vadis, Ed Fury, Brad Harris and John P. Dulaney. Like Monty, Harrison and Dulaney, Gordon Mitchell acted in low-budget action films in the Philippines during the 80's, having roles in Commando Invasion and SFX Retaliator for director John Gale. He came back to the United States in the late 80's and retired from acting but kept making occasional film appearances until his death.

Retrieved from "https://www.spaghetti-western.net/index.php?title=Gordon_Mitchell&oldid=33462"
Category:
Cookies help us deliver our services. By using our services, you agree to our use of cookies.