Review of the DVD release of The Grand Duel by Blue Underground. 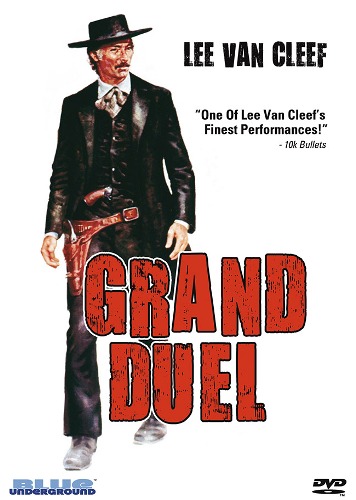 The movie offers no typical spaghetti western rotoscope opening credits, but relatively standard US-style opening. But don't be fooled, it's still not the clean type Hollywood flick. Shot at the later point of Lee Van Cleef's career, Grand Duel tells a complicated revenge tale with an - at least for spaghetti westerns - atypical black and white flashback sequence that keeps the audience in the dark, so to speak, until the last minutes of the movie, which ends in an epic showdown. For director Giancarlo Santi this was one of only three films he ever directed on his own, he's mostly famous for being a second unit or assistant director on The Good, The Bad and The Ugly, Death Rides a Horse, Once Upon a Time in the West and Duck, You Sucker!, among others. Here he delivers an entertaining, mostly straightforward but stylish spaghetti western that has been flying a bit under everyone's radar for a while, but I do think it's regaining some points with fans. Once you look beyond the tediously moving plot and some of the inconsistencies, Grand Duel is an above-average genre entry with some great lines, great moments and wild stunt work.

The music by Bardotti and Bacalov is of course one of the biggest things this movie has to offer. The famous opening tunes and some other musical motifs are known to millions of newer generations now due to its use in Quentin Tarantino's Kill Bill (used in the Anime flashback sequences). There's a few other tunes here as well, however, which manage (I would say in a negative way) to flip the movie's serious tone around and make it seems a bit light-hearted at times. This, and some nice one-liners and a lack of brutality especially in the first half make the movie slightly tame, which sets it apart from, say, Death Rides a Horse, which is thoroughly serious and bitter. That wouldn't be a problem but it just doesn't fit the serious subject matter, so it remains slightly off-balance I would say.

"I don't talk unless I feel like it, that's one of my rules" - Clayton.

As for the cast, Lee van Cleef shines as the ex sheriff with semi-laudable motives, but he doesn't quite dominate the screen as much as Alberto Dentice, who's the real star of the movie. That guy just made three movies and I have no idea what ever happened to him, but he seemed to rock a George Harrison type of cool, lots of acrobatics and reminds me a little of Andrea Giordana. Also great is Horst Frank in a double role, Klaus Grünberg as quite the psychopath and Marc Mazza as the pushed-around marshal. There's a flurry of other side characters and cameos, needlessly complicating the story and adding very little other than screen time. It steals some of the focus, I'd have rather spent a bit more time with the main protagonists.

Interestingly, now that I think of it, the music is not the only Tarantino connection here. The entire stagecoach and haberdashery-stop element had The Hateful Eight written all over it. But I might be wrong. Taken together, Grand Duel deserves another consideration. It's not as groundbreaking as Death Rides a Horse, but it's not as bad as God's Gun either.

This is one of the few older Blue Underground releases that haven't received an HD update (Mill Creek has released it, see here), but that isn't a big problem. Unless you're projection onto a screen, the DVD's quality is fine enough to satisfy even owners of fairly big HDTV screens. The transfer is decent enough to survive the upscaling without getting mushy. The close ups look fantastic. So, albeit the image transfer is really solid and looks great even blown up on a fairly big HD screen, I am not able to compare it to the two BluRay releases of this film that are available. I would be interested in owning it on HD though, not sure if Blue Underground will deliver on that ever. If the source material is any indication though, it looks good enough to be the same source. At any rate, it's fairly crisp image, the colors are right, it's free of blemishes and contrast levels are alright as well. Great looking transfer. Where it shows its age (this release is 13 years old) and SD tech, is the compression which comes to show with some camera movements and action sequences. But honestly, for a DVD, this looks as great as it gets. The audio track is alright, it can't hide its age and looks a bit hollow sometimes, but it's a forceful, hiss/scratch-free track with decent depths and audible dialogue. The English dub is of course no always great, but you get Lee's original voice.

One big selling point for this disc is the included audio commentary with journalists C. Courtney Joyner (who has also contributed to at least two other spaghetti westerns released by Blue Underground) and Henry Parke (not sure if it's this one). It's entertaining, informative and a nice way to re-explore the film. Additionally, there's the theatrical trailer and a trailer reel. There are no subtitle options on this DVD.

Review by Sebastian. The DVD was supplied by Blue Underground.