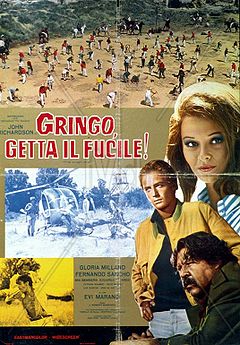 This is not a spaghetti western, but it could almost pass for one. The Italian title was obviously chosen to cash in on the popularity of the genre and the script offers a series of elements from the Zapata westerns, such as a European adventurer joining the revolution in a Latin American country for opportunist reasons, an execution (of a revolutionary leader) prevented in the very last moment, lovely señoritas, sadistic federales and a local tyrant played by Eduardo Fajardo himself. However, it’s a contemporary story (contemporary when the film was made) set in South America (instead of revolutionary Mexico). We get trains, automobiles and even a helicopter. 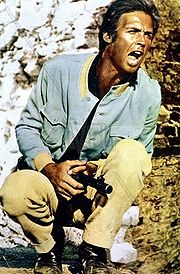 A young Irishman, travelling by the name of Daniel Casey O’Hara, arrives in a small town in Guaynas (Guyana?), telling the locals that he’s looking for his father. He is thrown in jail for beating up a man, but is soon released by the local governor who thinks the young man might lead him to father O’Hara, a prospector who has located a diamond mine, but has disappeared afterwards. Daniel has saved the life of the revolutionary leader El Lobo (played by Fernando Sancho, as ebullient as ever), who offers him one of his lieutenants as an escort (he also has a queer eye on the diamonds). With his help, Daniel manages to locate his father in a labour camp deep in the heart of the jungle, but nobody can be trusted in this twisted adventure tale: the escort is a traitor, father O’Hara has no diamonds, and Daniel is not his son …

This is by no means a great movie but it’s a pleasant curiosity, and note that it was made before the world had ever heard of Zapata westerns. The movie’s most original strike, is the identity of the adventurer. Instead of a specialist in warfare, he’s a sound engineer who uses his skills to confuse his opponents. In an execution scene Zapata style he uses a microphone to give the firing squad false orders, and during the grand finale he turns a keyboard into an explosive weapon. He’s also a very sophisticated person, well-dressed, well-mannered, listening to classical music on his portable record player (!). John Richardson seems very comfortable in the lead, playing the part of the womanizing adventurer with an air of superiority. The final scene is very nice. After Daniel has been told that his ‘father’ made up the story of the diamonds to save his own life, he walks away with the señorita he has fallen in love with, but El Lobo and his men, who want to finance their revolution with them, keep digging for the diamonds in the enormous courtyard of the labor camp, where they believe the gems are hidden. 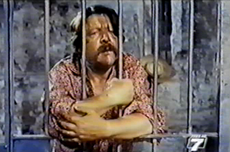 This is quite an obscure production. Initially it was only released in Italy (under its fake spaghetti name), where adventure movies were more often re-titled (or even re-edited) to make them sound and look like westerns. It was only released in Spain in 1969, under its original title El Aventurero de Guaynas and re-released in 1982, under the alternative title El Tesoro del Padre O’Hara. I have no idea when or where it was released in the English speaking world, but I managed to trace a few English titles. The most common title is The Tough One, but it was also - erratically - called The Adventurer of Iguana (an Iguana is a lizard, as far as I know).

Retrieved from "https://www.spaghetti-western.net/index.php?title=Gringo,_getta_il_Fucile_(The_Tough_One)_Review&oldid=100827"
Categories:
Cookies help us deliver our services. By using our services, you agree to our use of cookies.