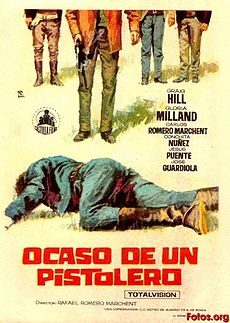 An early Spanish western, the first directional venture for Rafael Romero Marchent, the younger brother of the slightly more famous Joaquín, who scripted the movie and co-produced it. It was also the first European western for American actor Craig Hill. It’s often called one of the better early Spanish examples of the genre. The original title means Twilight of a Gunfighter, which would have been a far better title than the rather insipid Gunman’s Hands. With the melodramatic story in mind, it could also have been called Gunman on the Verge of a Nervous Breakdown.

Dan Murphy is former gunslinger, a man with a price on his head, who has given up his gun in order to live a peaceful life. His dreams are haunted by memories of an incident in which his newborn son was accidentally shot by a sheriff who wanted to arrest him. Today Murphy lives with his wife Laura and their son on a remote ranch. And their son? Wasn’t the child killed during the incident with the sheriff? It was, but Murphy and his wife have stolen the sheriff’s son and raised him as their own, naming him (like the deceased kid) Davy. One day one of men who have been looking for him in the name of the sheriff arrives at the Murphy ranch, proposing a deal: if they are willing to hand over the child to his natural father, he’ll no longer be a wanted man. Laura urges her husband to accept the deal, because stealing the baby was wrong in the first place and they will never find peace until they’ve set things right. Murphy agrees, but then his neighbor is killed and he feels compelled to pick up his guns again …

Like most early Spanish efforts, it is still under the influence of Hollywood. It often feels like one of those psychological Hollywood westerns from the fifties about gunslingers trying to forget their violent past. This premise is fused with a melodramatic storyline about a boy who is raised by a man who kidnapped him, and therefore must choose between his ‘two fathers’. The first half of the movie offers a few fistfights but is otherwise rather tame, but things pick up with a bizarre (and fascinating) scene, a sort of variation on Russian Roulette, in which Hill takes care of Lulli, the oldest and most dangerous of the evil Carter brothers, who have been challenging him all the time. We then get a quick succession of events, leading to a melodramatic, but quite effective finale that may still be Spanish in spirit, but is shot in the more baroque style of the Italian western. The Spanish westerns usually have a cleaner, less ‘dirty’ look and the emphasis is more on personal honour and chivalry than the blood calls for blood philosophy of the Italian westerns (1). The dramatic outcome (the obsessed Murphy is beyond redemption) is still in line with the Spanish approach, but the way the shootout is filmed, already shows where the genre was heading. 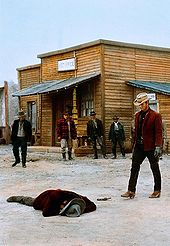 It’s not a surprise that this movie got some good comments from those who appreciate European westerns with a Spanish feel. Personally I thought the narrative felt a little disjointed here and there, with different story elements not always engaging very well with one another. Too long the storyline with the evil Carter brothers feels detached from the basic plotline about Hill’s decay from a peaceful man into a nervous wreck who brings about his own downfall. But the action scenes work well and Hill is quite effective as the troubled Dan Murphy. Hill is a more introspective (rather than an expressive) actor, and his performance is helped by stripping the role from all sentimentality (2). And the kid isn’t too irritating either. An above average achievement.

Retrieved from "https://www.spaghetti-western.net/index.php?title=Gunman%27s_Hands_(Ocaso_de_un_Pistolero)_Review&oldid=102468"
Category:
Cookies help us deliver our services. By using our services, you agree to our use of cookies.