Guns of the Magnificent Seven Review 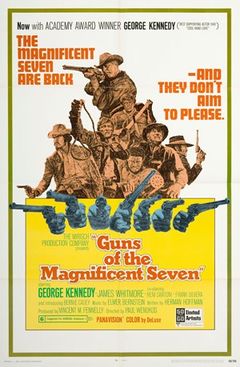 Like Return of the Seven, this second sequel to John Sturges' The Magnificent Seven was shot in Spain. George Kennedy takes over from Yul Brynner as Chris, the leader of the Seven. With this third entry, we also enter Zapata land. In the original movie the baddies had been marauding villains threatening poor farmers, in the sequel a rich landowner had kidnapped peons to use them as slaves, in this movie, Chris and his men are asked to free a revolutionary agitator named Quintero, an intellectual who is trying to rally the various groups opposing dictator Diaz. In true Zapata style, this intellectual revolutionary is played by Spanish actor Fernando Rey.

Guns of the Magnificent seven has the same assets and shortcomings as the previous movie: it's formulaic and predictable, but it's a rousing adventure yarn and it passes the time smoothly. Once you hear this heroic Elmer Bernstein score, you know you're in for a nice ride with Chris and the boys. It takes some time before it burns loose, but once it does, the action is large-scale and overwhelming and the cast is very fine. Personally I was nicely surprised to discover Monte Markham in a western setting. He's one of those actors who always seemed to be on TV when I was small (1). Joe Don Baker is also a pleasure to watch as a crippled sharpshooter with psychological problems.

Most people rate Guns a tad higher than Return. Director Wendkos and his screenwriters seem to have worked on one aspect that was often criticized. In the first two Seven movies, the Mexican farmers were presented as hard-working and full of life, but for their protection, they completely depended on their neighbours from across the border. It all felt a little patronizing. In Guns the Mexican member of the bunch is played by Reni Santoni (Eastwood's partner in Dirty Harry) and he adds a bit of wit and venom to the role. Furthermore the Mexican rebels are presented as divided among themselves: there are - like in most Zapata movies - no-goods and profiteers, but there are also men who are loyal to the Revolution: the hard-drinking leader who wants to remain passive while the Seven attack the fort in which Quintero is kept prisoner, is killed by his own aide-de-camp, who immediately orders to attack.

That's all very nice, but don't expect any other drastic changes: Guns is a very traditional western movie, the Mexicans still need the Americans, and to make things easier they all speak English to each other. In fact even the smallest children are fluent in English. These are all movie clichés, of course, and there's nothing wrong with a good traditional western movie, but in this particular case it has an unwelcome side-effect: the film offers one of those cute Mexican kids who wants to ride with the Seven. He decides to ride with James Withmore. This fine actor is at his best when he plays a grumpy old man, but the kid turns him into a good-natured grandpa. 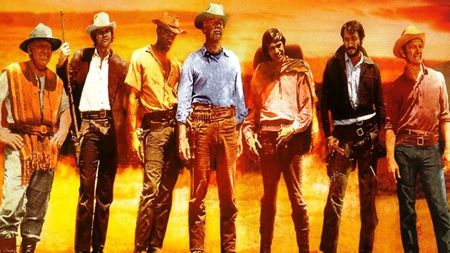 Retrieved from "https://www.spaghetti-western.net/index.php?title=Guns_of_the_Magnificent_Seven_Review&oldid=106548"
Category:
Cookies help us deliver our services. By using our services, you agree to our use of cookies.