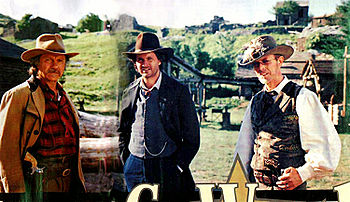 Gunslinger’s Revenge is a transatlantic hybrid; an Italian spaghetti western tale of revenge, set into the classic American theme of an antihero seeking to escape his past. But the story is neither a Leone saga of survival in a heartless world, nor a sentimental B-western of the classic Hollywood movies—-our narrator and main character is a bright schoolboy, Jeremiah (Mercredii), raised in both his mother’s Native American culture and in the boomtown of his father. Jeremiah has a mischievous streak, a Tom Sawyer sort of kid who sees the townsfolk and the Plains Indians for who they are, yet tells in his story in the simple, loving way of a child. Jeremiah reveals a dark undercurrent as his story progresses. He welcomes the return of his estranged grandfather Johnny Lowen (Harvey Keitel), who disrupts the lives of Jeremiah’s pacifist father Doc (Pieraccioni) and gentle mother Pearl. Johnny’s violent life must catch up with him—he has too much to answer for, as the elegantly depraved bad man Jack Sikora (Bowie)points out.

What follows Sikora’s dramatic entrance into the town saloon has elements of great American westerns like High Noon and The Gunfighter. The townsfolk initially recoil from Sikora and his gang, who take sadistic pleasure with the local women and try to goad Johnny into a final showdown. When Sikora’s followers take Jeremiah and his teacher and mother hostage, the whites and Indians, buffoons and civic leaders rise to the occasion together. Perhaps the best role in Gunslinger’s Revenge is the town eccentric Joshua, played with great panache by Jim van der Woude, who risks himself for Jeremiah and his family.

Told with humor and subtlety, Veronesi's Gunslinger’s Revenge makes for a good solid western with a sound narrative and remarkably nuanced characterization, given he is working within stock themes. Highly recommended.