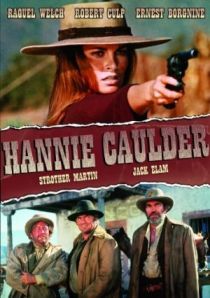 Of all the oddities of the Western Wonderland of the early seventies, this must be one of the oddest. Like many westerns of the period it was shot in Spain and offers a cast of familiar faces as well as a few surprise appearances; it also tries to outdo the violent and perverted tendencies of the previous decade with lots of blood and a particularly nasty rape scene. With Ernest Borgnine, Jack Elam and Strother Martin playing the baddies in Three Stooges style, one might be tempted to think that this is one of those rather cheap American pseudo spaghettis, but the film is British, which explains some of the surprise appearances, such as Christopher Lee, Mr. Dracula himself, as a gunsmith, and Diana Dors as a prostitute.

In the opening minutes, the assorted trio of villains (impersonating three outlaw brothers) try to rob a bank in a sleepy Mexican border town. It’s an outrageous scene, with so much blood spilled, that it comes close to parody. Director Kennedy had done a few good western comedies (notably Support your local Sheriff and the sequel Support your local Gunfighter), and the scene was probably meant as a spoofy version of the opening scene of The Wild Bunch, but it’s so gross, and at the same time so stupid, that it fails in every aspect. After all, even outlaws as inept as the Clemens brothers wouldn’t have robbed a bank with a regiment of federales sleeping on the porch of a town building. The next scene is the infamous rape scene, with the three brothers not only raping a woman, but also killing her husband and burning down her house. For one thing this movie does not portray rape as a thing a woman deserves or unconsciously is longing for, but otherwise the sequence is filmed with an almost total lack of subtlety or restraint. And again so much blood is spilled & spattered that the killing of the husband looks like a ritual slaughter.

The woman is of course played by a then thirty-one year old Raquel Welch. She had been in several westerns before, still her appearance, dressed in no more than a poncho, must have caused quite a shock among moviegoers. Surprisingly, after these questionable opening minutes, the movie finds the right tone as it goes along. A key element is a strong performance by the much underrated Robert Culp as a bearded and spectacled bounty hunter, hired by Welch to turn her into a proficient gunwoman who can get even with the thugs who ruined her life. He gives her the shooting lessons she’s asking for, warning her at the same time of the ultimate futility of the revenge mission she has planned. Culp’s wonderfully reserved performance provides the movie with exactly the right counterbalance for the outlandish atmosphere. The shooting lessons are wisely nested in a carefully handled interlude involving Christopher Lee as the gunsmith with more children than you can think of. This is all handled with so much care, that we seem to have wandered into another movie. The scene eventually culminates into a bloody shootout with a Mexican gang of cutthroats, which seems a bit thrown in, but also leads the film to its final act, describing Welch’s revenge. 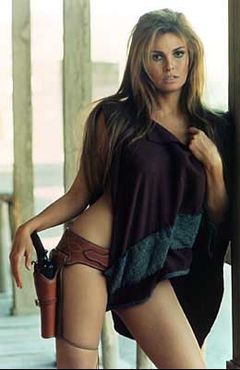 Once past the first ten, fifteen minutes, Hannie Caulder is a surprisingly enjoyable western, although the would-be mystical ending is weak (what’s all this nonsense with Stephen Boyd as a priest - or not a priest – supposed to mean?). But director Kennedy carefully watches the pace of his movie, alternately slowing it down and speeding it up, and even some of the comedy starts to work (Borginine and Martin starting to fight while trying to rob a stagecoach!). Edward Scaife’s lush cinematography of the Spanish locations is admirable. I wasn’t too pleased with Ken Thorne’s score. It occasionally reminded me of Jerry Fielding’s magnificent score for The Wild Bunch, but never seems to find the right balance between classic and modernist influences. Too much old school in a modern context. But of course in this movie everything (direction, landscape & score) plays second fiddle to Welch. She had never looked better and would never look as good again as she did in Hannie Caulder. A promotion pic of her in her poncho, and no more than a poncho, became one the most iconic images in the history of film making.

Retrieved from "https://www.spaghetti-western.net/index.php?title=Hannie_Caulder_Review&oldid=132393"
Category:
Cookies help us deliver our services. By using our services, you agree to our use of cookies.