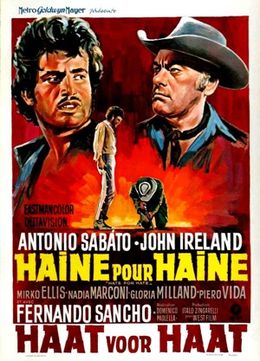 In his first spaghetti western, Canadian born John Ireland is Jim Cooper, an aging outlaw of the gentle kind. He's preparing for old age and dreaming of a peaceful life as a farmer, on a small ranch across the border, with his Mexican wife and daughter (who doesn't know yet that her father is a bank robber). Therefore he doesn't want to make any casualties, but during a bank robbery his partner, the psycho Moxon, kills four bank employees for no other reason than to quench his thirst for blood. Jim dumps Moxon, hides the loot in a safe place, and befriends a young Mexican called Miguel, an occasional witness of the robbery, a miner who also happens to be a talented artist, dreaming of exhibitions of his work in New York. The two are arrested but while Jim is sent to a labor camp (where he contracts malaria), Miguel is released from prison after it has become clear that he had nothing to do with the bank robbery. Miguel promises Jim to look after his wife and daughter, but when Jim breaks out of the labor camp Miguel seems to have forgotten all his promises: he's now working for the evil Moxon, who's still after the loot ...

The film is very enjoyable but I also found it needlessly convoluted. According to some people involved in the production, Zingarelli took over direction from Paolella on several occasions (the two weren't the best of friends); Paolella was a bit of a snob who had worked for Pasolini and looked down on the genre. Furthermore the script was a baby of many spiritual fathers; no less than four screenwriters are mentioned, among them Bruno Corbucci and Fernando Di Leo, who all brought in their proper ideas after a first draught of the script was rejected by Paolella (1). At first sight, Odio per Odio looks a little like one of those caper movies about several people vying for a large sum of money. But Sabáto also plays a sort of Cuchillo, full of life, ever-smiling, and the finale has an army of peones coming to the rescue of the two heroes; for this reason some have called it an early Tortilla or Zapata movie. The first half is fairly light-hearted, but at the halfway point the movie turns into a violent melodrama about a good-natured family father driven crazy by illness and feelings of revenge.

If any spaghetti western deserved the label 'mixed bag' it's probably this one. Quality, content, it's all mixed, and the movie also offers a fair mix of the classic Hollywood style of storytelling and the more exuberant Italian approach. Ireland has never been better in a spaghetti western, probably because it was all new to him at this stage; in later movies he would adopt the more mannerist acting style of his Italian colleagues, not always to great effect. Here his reserved presence is in stark contrast to Sabáto's hyper-active behavior and the combination works pretty well. The first forty minutes are rambling but the storytelling gets better en route, even though some story elements remain a little enigmatic: the movie stars Fernando Sancho - as ebullient as ever (he kills a man twice because he's a traitor!) - but his presence is never really explained; he seems to walk around (on one leg, like a sort of Long John Silver) because the screenwriters needed him (and the peones) for the finale. The first half is virtually without recognizable spaghetti western action, but the bodies pile up towards the end. Nevertheless this was one of the few spaghetti westerns that got the blessing from the Vatican for being not too violent and propagating family values (2).

Willy Brezza's score isn't bad but too repetitive; however, using a harmonica theme as a leitmotiv in a spaghetti western score is always a good idea. According to some sources the movie was shot on locations all across Spain, along them Almeria, but I didn't recognize any of the familiar Andalusian locations, so I guess Giusti is right when he states it was entirely shot in the North-Eastern province of Catalonia (3). Some locations are quite ugly, but cinematographer Alejandro Ulloa makes the best of the combination of sandpits, hills and grasslands. One scene, a lawsuit in the open air, was shot near the remnants of an old fortification. It was identified by location hunter Yoshi Yasuda as the Castillo Montjuic in Barcelona. 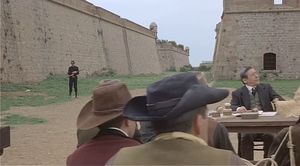 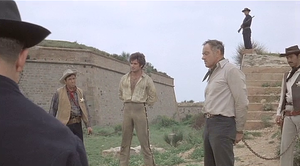 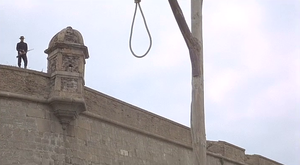 A Lawsuit in the Open Air

The location was a bit hard to identify because we don't get any panoramic view of the complex in the movie. The film makers only hired one corner of it, and filmed the entire sequence from one singular angle. Ray Watts and Javier Ramos Altamira proposed the Castillo San Fernando in Figueres. It's still a possibility, but I tend to think Yoshi is right. Just compare the screenshots to a photo on an internet site he found: http://www.tripadvisor.fr/LocationPhotoDirectLink-g187497-d2359212-i20540803-Parc_de_Montjuic-Barcelona_Catalonia.html

Retrieved from "https://www.spaghetti-western.net/index.php?title=Hate_for_Hate_Review&oldid=116156"
Categories:
Cookies help us deliver our services. By using our services, you agree to our use of cookies.