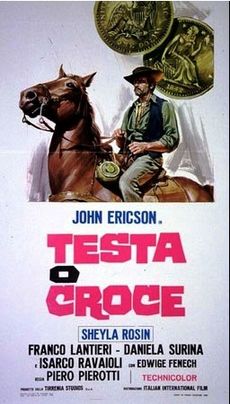 Among the oddities the genre has produced, this is one of the oddest – and one of the sleaziest, a blend of western, thriller and exploitation. It opens in comedy style but very soon we’re in a world of rape, torture and revenge, with women left for death in the desert or burnt to death in a log cabin.

In Plata City, Arizona all men go crazy about the ballerinas working for saloon owner Boccadirosa (1). The chaste and pious women from Plata City are not amused, and one day, when Shanda, the most popular of all girls, is accused of murder, they grab their chance. What follows, is definitely out of the ordinary. Imagine one of those would-be funny and totally incongruous barroom brawls, and then imagine the brawl is executed by pious women chasing and beating women of easy virtue, and you might get an idea of the silliness of the scene. But then, all of a sudden, we spot a woman looking out of her bedroom window, getting sexually aroused by the sight of a Mexican girl (Edwige Fenech) being stripped to the waist and given a flogging in the town’s street. It’s a bizarre, totally unexpected scene, catapulting viewers into a completely different kind of movie.

To save Shanda from a lynch mob, the sheriff sends her to the nearby town of Phoenix, escorted by two deputies. The two men are joined by a shady person, and eventually they rape the woman and leave her for death in the desert. Like in Adios Gringo, the rape victim is found by a man on the run, a person known as Black Talisman (John Ericson), who nurses her back to health. But unlike Gemma in Adios Gringo, Ericson is not a man falsely accused of a crime he never committed, but a man who is wanted in four different states. When this hardened killer meets the sado-masochistic woman who was witnessing the flogging of the Mexican girl, she falls for him because his hands smell of blood. What a wonderful world we live in, don’t we? 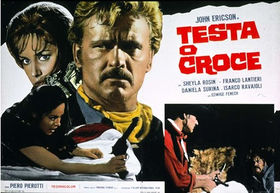 The film was entirely shot on the premises of the Tirrenia Studios, located between Pisa and Livorno. The lovely Tuscan hills look far to green to represent the arid landscape of Arizona, and the film also suffers from its limited budget. According to some of the actors, director Pierotti could only finish the movie with the help of Ericson and some financial support of Universal Pictures (2). If the landscape doesn’t fit and most outdoor scenes have a cheap look, some indoor scenes are quite good. There’s one terrific scene with Ericson and Surina lying on a bed, swathed in a cherry-red bed-spread, as if they’re bathing in blood, creating a visual effect not dissimilar to what Hitchcock did with a purple gown in Topaz (made in the same year, 1969). Testa o Croce is not a great film, but the least you can say about it, is that it’s different: the mood is different, the costume design (Ericson wearing green trousers!) is different and even the western town of the Tirrenia Studios looks completely different from what we’re familiar with. As for the sleaziness: it was made in 1969, and compared to that other piece of sleaze, Blindman, made only two years later, it almost looks restrained. You’ll have to be quick to catch a glimpse of Edwige Fenech’s left breast. Some scenes are quite suggestive though, like the one with la Fenech (3) begging Ericson (who’s about to torture one of the rapists) to give her the knife and let her emasculate the piece of vermin. For those who can appreciate a sick joke, it’s quite funny too.

The scene in Topaz is no doubt the best remembered of an enjoyable but otherwise unremarkable Hitchcock movie. The woman, Juanita, is shot by her lover, Rico, a Cuban revolutionary hero, after he has found out about her espionage actions. Hitch uses a high-angle shot, Juanita looking up in shock, her purple dress spreading away from her, like a pool of blood spreading away from a victim. He used a purple dress because he had often used ink to represent blood in his black & white days. The scene in Testa o Croce is less sophisticated, but very effective and sexy, with Ericson and Surina discussing their bizarre relationship (and Surina's fascination for violence) on blankets which seem unable to absorb the gushing blood.

Retrieved from "https://www.spaghetti-western.net/index.php?title=Heads_or_Tails_(Testa_o_Croce)_Review&oldid=102719"
Category:
Cookies help us deliver our services. By using our services, you agree to our use of cookies.