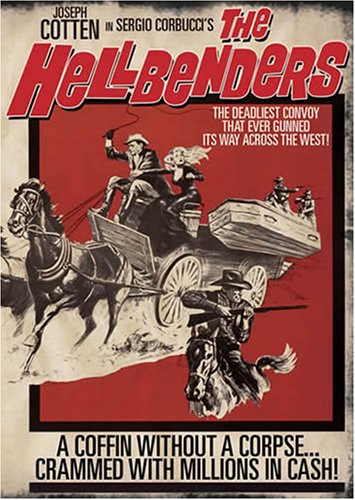 A former CSA officer played by Joseph Cotten, heads a gang of family members and a woman playing a widow, to rob a money transport and then hiding the money in a coffin, trying to smuggle it through enemy lines down south, to realize his madman dreams of reestablishing the confederacy. The trip is a deadly one. Treason, animosity among his family, bad weather, Mexican bandits, Union troops and the law are after them, and they're hoping for the cover to hold up, but it is a crazy mission. The coffin full of money, him and his sons, who will end up at their chosen destination to fulfill his crazy dream?

What a pleasant surprise. I'd heard a bit about this movie but I did not expect it to be so god. Of course, Corbucci and Barboni, that's a promising combination for a Spaghetti Western helmed by Joe Cotten. I was intrigued from the beginning. The premise gives way to just so much potential conflict and plot turns, which make the movie so enjoyable watching. The tensions among the gang, his crazy goal, the sideplot with the women, the part about the coverup, it is all very well written and definitely not off-the shelf Fidani stuff. The acting is great, too. And the music, while Spaghetti-esque, although not being epic, contributes a great deal to the rising tension of the film. Barboni's cinematography does the rest. The bottom line is a great western that is very entertaining and well made. I'm very delighted to finally having watched it.

After a weird release by a different company some months earlier, Anchor Bay (now Starz Home Entertainment) rolls out this restored widescreen version of the film. While the disc does not contain any special features worth mentioning, and the menu is really done without love for the cause, the cover art looks great and the film's presentation is worth the money. The picture is colorful and without much visible damage. The only thing bugging is a lack of some more sharpness and a bit grain here and there, but overall, the picture is a very good presentation. In the audio department, there's only the English dub, but it is well restored, sounds great and leaves no room for complaints. I watched this disc on a huge screen, which usually uncovers lots of image flaws, but I have to say they did a really good job with this disc.

A great film, with lots of good acting, well written plot and good cinematography. An entertaining western that is not too long and leaves you with the satisfied feeling of just having watched an A grade Spaghetti Western. The Anchor Bay disc is worth its money, offers a great presentation of the film, but no extras. A must purchase for the fan.