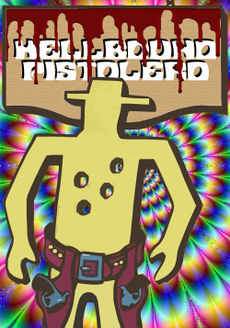 A devilish gunslinger wakes a dead man in his quest for gold, faces his eerie Indian drug dealer and a psychopathic Zorro, to eventually wind up in a grim and frostbitten kingdom to blow up a man with a $5,000 bounty on his head...

Retrieved from "https://www.spaghetti-western.net/index.php?title=Hellbound_Pistolero&oldid=103774"
Categories:
Cookies help us deliver our services. By using our services, you agree to our use of cookies.