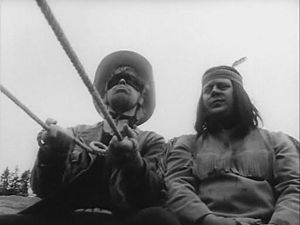 The Lonely Rider (Loiri) and his Indian sidekick Tonto (Salminen) have captured the notorious gunfighter Speedy Gonzales (Pasanen) who is wanted man in the town of Three-pence-city. To collect the reward they have to travel through the desert which turns out to be difficult task. They get attacked by indians who steal their horses, they get lost and above all: they don't have any water. One day's travel extends to six weeks journey in the hellish heat of the desert.

Pertti "Spede" Pasanen was the biggest name of the Finnish comedy scene during decades. From the early 60's to his death in 2001 he directed, wrote, produced or acted in about 50 movies and participated in numerous TV productions. Critics used to dismiss his films but they were hugely popular among Finnish audiences, especially the long running series of Uuno Turhapuro movies which starred the multi-talented actor and musician,Vesa-Matti Loiri. Pasanen, Loiri and Simo Salminen formed a comedic trio who starred together in numerous movies and tv-shows. Hirttämättömät is interesting film because along with this trio there is just a few actors playing supporting roles.

Hirttämättömät (Unhanged ones) is sequel to Pasanen's first comedy western Speedy Gonzales -Noin seitsemän veljeksen poika where he played the same character. First movie was a kind of murder mystery set in the (Finnish) West with many characters, load of funny sketches and even if made by little budget it had a nice looking western town and landscapes. Hirttämättömät on the other hand is a film reduced to extreme. It's shot almost entirely on a sandpit with only three actors and a wagon. Plot is very simple and basically it's a movie with just one on-going joke: The lack of water. Gonzales is always on the top of situation with hidden water stash while his captors are dying of a thirst. Lonely Rider is gradually going insane and his sun-burnt, chapped face gets worse and worse as the days go by.

All the actors do a good job but it's Loiri who really steals the show as a Lonely Rider. He's always praising himself and singing songs about himself. As he finally starts to flip he's constantly babbling about science to Tonto and talking to himself. And whatever stupid mistakes he does he always tries to remain cool as if he had made just what he was aiming at. Pasanen has stated that this was his favorite movie in his filmography, it was also one of the very first ones where he was stepping aside from the main role giving more room for the comedic talents of Loiri. It was definitely a wise decision.

Sandpits are familiar landscape in many b-westerns, especially in Demofilo Fidani's westerns where the cliffs of the pits are well used for some stunt falls. Hirttämättömät is the ultimate sandpit western as more than 70 minutes of the films running time of 84 minutes are shot in the same sandpit. It doens't even try to look like a authentic western desert as you can always spot some pines on the top of the cliffs. But that's part of the charm and the joke of the movie -they're not even in real desert but in small gravel pit and yet they're still going in circles.

Film can also be seen as a parody of the Leone films or more specific as a parody of the desert scene of The Good, the Bad and the Ugly. There is certainly a connection with the three greedy protagonist trying to get reward money but this could also be a coincidence. Pasanen's knowledge of movies wasn't always the best. For example, there's a scene in Speedy Gonzales very similar as in Marx Brother's Go West. Director told about it to Pasanen but apparently he had never seen Marx Brothers movie.

So, is the movie funny? It's always hard to tell what people find funny and especially with comedies which are mainly targeted at market of the home country only. For example I haven't found any of the Franco & Ciccio comedies funny though apparently they were quite popular in Italy. Also, most of the comedy spaghetti's are just plain boring for me. Hirttämättömät is one of those films you will probably either love or hate. If you can get into the joke it's hilarious film but if not, then it will probably bore you to death. For me Hirttämättömät is the funniest comedy western I've seen.

Film has been released on dvd in Finland but unfortunately with swedish subtitles only. Print itself is far from perfect but passable. Fan made english subtitles can be found on the web. (Yeah, guess who did it?)

Retrieved from "https://www.spaghetti-western.net/index.php?title=Hirttämättömät_Review&oldid=69442"
Category:
Cookies help us deliver our services. By using our services, you agree to our use of cookies.