A sadistic bandit named Jenkins (Carlos East) finds himself with a $5,000 bounty on his head after stealing an army payroll and murdering an officer’s widow near the town of Hot Snake. The sheriff of Hot Snake enlists a bounty hunter named Emiliano (Eric del Castillo) to pursue Jenkins but Emiliano is too preoccupied with his woman, Eva, to go after the bounty. It’s not until Emiliano’s friend Miranda is killed by Jenkins that he finally decides to hunt him down.

Emiliano visits a spiritual future-seer called Ramona (Monica Miguel) who warns him not to take the bounty, and tells him to beware of “a day with two nights”. During his pursuit of Jenkins, he is followed by a young boy named Erick (Ricardo Noriega) who has a vendetta against Emiliano and his girl Eva for tormenting him in the past. Emiliano eventually catches up with Jenkins and takes him down in a bloody slow-mo duel.

However, as Emiliano is taking his bounty back to Hot Snake supernatural occurrences start happening. Jenkin’s corpse moves position and has its eyes open, his canteen is full of blood rather than water, and finally, one night after he wakes up, the corpse has completely disappeared.

After searching around in terror the sun disappears and a ‘second night’ happens. Suddenly, he sees Jenkin’s corpse riding on a horse towards him. After blasting away the six shots in his pistol, Emiliano flees in terror until he stumbles upon a pool of water. While in this moment of weakness, Erick makes his move on Emiliano by shooting both his hands. Emiliano realises that Erick had been taking advantage of his dehydration and his fear of the future-seers warning by tricking him into thinking Jenkin’s corpse was still alive. Erick finally plugs a few shots into Emiliano’s chest and finishes him off.

Erick hands over Jenkin and Emiliano’s corpses to the sheriff who is not pleased that his good friend was gunned down. Erick uses his bounty money to spend time with Eva, Emiliano’s lover who works in a whore house. As revenge, Eva slips a powder drug into his whisky, which Erick drinks but eventually notices that the drink was tainted and promptly drowns Eva in a bath. While trying to flee, he sees the corpses of Emiliano and Jenkins waiting for him. He tries to shoot but is quickly gunned down by the pair. As he falls, the hallucination fades and it’s revealed that it was actually the sheriff and his deputy who shot him down as revenge for Emiliano.

Hot Snake is a very slow western. A large majority of the runtime is dialogue-less scenes of Emiliano traversing the scorching desert and brutally shooting snakes. There isn’t much shooting or fighting but when there is, it’s done fantastically. In far too many westerns, someone getting shot just ends up with them clutching their wound and falling over, leaving the result of the shooting quite disappointing. Gunshots in Hot Snake are fantastically loud and impactful, with every bullet causing a squib full of bright-red blood to explode from the recipient's wounds. This looks extra fantastic when done with slow motion, which the film does for two different deaths.

The uniqueness of this Mexican western comes from the supernatural elements found within the film. It’s quite similar to Django Kill…If You Live, Shoot! (1967) in that it deals with the living returning from the dead, just like Milian’s character in Django Kill. There is always a sense of unease during the film that leaves you wondering whether there are spiritual powers at play or whether the characters are simply losing their sanity.

Despite these unique features, Hot Snake doesn’t quite deliver on being a compelling western. While its slower pacing is used to show some gorgeous landscapes, none of the characters are that interesting and they desperately needed some more scenes to develop them a bit more. The character of Erick is the biggest failure here, as his motivations for going after Emiliano seem quite silly and are only told during very brief flashbacks. There is not nearly enough of Jenkins, who is by far the most interesting character here as Emiliano feels very one-dimensional and isn’t the most likeable character so I never really found myself rooting for him. 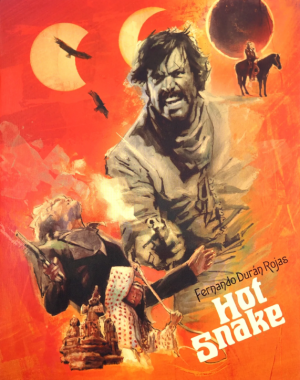 Hot Snake has been released by Vinegar Syndrome as a double pack with another Mexican western, Guns And Guts (1974), click here to learn more about this edition. Both have been scanned in 4K from their original camera negatives in their original aspect ratios of 2.35:1.

Hot Snake looks pretty fantastic details-wise, but the scan isn’t totally clean with some occasional specs of dirt and some minor print damage. These don’t stop it from looking great however, especially for a very obscure film like this.

Audio-wise, it comes with its original Spanish mono complete with newly translated English subtitles. I’m no expert on audio but it sounds pretty good to my ears. Dialogue is clear and the subtitles were perfectly-timed and easily readable. My only gripe is Vinegar Syndrome’s insistence on using slightly yellowish subtitles rather than the standard white colour that almost every other physical media company uses.

Retrieved from "https://www.spaghetti-western.net/index.php?title=Hot_Snake_film_and_BluRay_review&oldid=134089"
Category:
Cookies help us deliver our services. By using our services, you agree to our use of cookies.