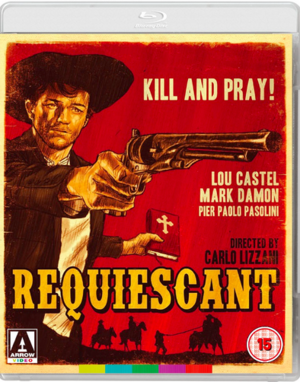 Following on from Day of Anger and Cemetery Without Crosses, Carlo Lizzani’s ‘Requiescant’ (1967) is Arrow Films third spaghetti western release on Blu-ray and DVD. It’s also known by the titles ‘Kill and Pray’ and ‘Let Them Rest’. First off, ‘Requiescant’ feels much more like an ‘Italian’ film than most spaghetti westerns, mainly due to an absence of Spanish supporting players and exclusively Italian location filming in Lazio (rather than Spain’s Madrid or Andalusia provinces). And the presence in a supporting role of legendary director Pier Paolo Pasolini, one of the most recognised and recognisable faces in Italian, in fact world cinema, is simply distracting when he pops up as Don Juan, a pistol packing priest with a social conscience. Like the “Jesus Christ, it’s Henry Fonda!” casting coup moment from Sergio Leone’s ‘Once Upon a Time in the West’, this is “OMG, it’s PPP!”

I’ve never known quite what to make of ‘Requiescant’, Lizzani’s second and last foray into spaghetti westerns. I saw it way before I had the chance to see his first western, ‘The Hills Run Red’ (1966) and had high hopes for the film, based on the fact that it was screened in September 1993 on BBC2 in ‘Moviedrome’ cult films season and it came recommended by Alex Cox. I’m a big fan of Lizzani’s ‘The Hills Run Red’. I don’t know why, but from the moment I saw it, I loved it. Morricone’s music helps, as does the solid cast, including grandstanding Henry Silva, beautiful Nicoletta Machiavelli, leathery old Dan Duryea and massively underrated Thomas Hunter. I know I am largely alone in my assessment and enthusiasm, but for those who make lists, I deem it Top-20 spaghetti western material.

An Italian-West German co-production, ‘Requiescant’ stars Lou Castel as a Mexican boy who is the only survivor of a massacre of Mexican peons at Fort Hernandez. The perpetrator was San Antonio landowner George Bellow Ferguson (Mark Damon), who with his cadre of gunmen has stolen their borderlands with bogus treaties. The boy is found wandering in the desert and is adopted by travelling priest Father Jeremy and his family, but when he grows to adulthood, he abandons the ways of the Lord. He discovers his true vocation when he inadvertently foils a stagecoach hold-up and finds he is naturally gifted with a six-gun. His proficiency leads to him becoming something of a hero to the local Mexican population, who give him the name Requiescant, as in ‘rest in peace’ in Latin, due to his ritual of reading a prayer over his victims’ corpses. Requiescant’s step-sister Princy (Barbara Frey) runs away to become a showgirl, but ends up in forced prostitution in a seedy San Antonio saloon/bordello run by Ferguson’s henchman Dean Light (Carlo Palmucci), which in classic spaghetti western tradition sets Requiescant against the murderer of his real parents.

The film’s tone veers from tragedy to comedy, and Castel makes an offbeat hero, even by spaghetti westerns standards. At some moments he plays the film as a spoof, as when he encourages his horse to speed up by using a frying pan to hit its rump and in his tactic of mounting his horse, first by climbing onto a hitching rail then into the saddle. In complete contrast to Clint Eastwood’s Man With No Name, Requiescant is something of a bumbler, with his gun holster slung on a piece of rope, but no one can argue with his accuracy with a pistol. There are some totally odd moments in the film also, as when Requiescant hides out at Fort Hernandez and discovers the bleached-out skeletons of the Mexican victims of Ferguson’s massacre scattered behind the palisade – it is these corpses from the past that must also ‘Rest in Peace’, but only when their murders have been avenged. In another noteworthy scene, Requiescant faces Dean Light in a pistol duel, with both participants standing on stools with their heads in nooses (as Tuco the Ugly tried to execute Blondy the Good in a Leone classic) which is timed by the midnight strike of a clock. At one point Princy is forced to swallow a drug that makes her hallucinate and much is made of the simple rural characters’ naivety against savvy, capitalist businessmen.

For its lack of authentic spaghetti western atmosphere, ‘Requiescant’ is a definite curio for a number or reasons. In some respects it’s more realistic than many spaghetti westerns. Here the poor Mexican revolutionaries collect Requiescant’s victims’ valuable weapons, rather than leaving them lying around with the corpses, as Clint’s Man With No Name does in the ‘Dollars’ films. What makes the film of real interest is its unusual cast. Mark Damon is a cloaked villain from the cobwebs of Italian gothic horror, a dusty relic of the Old South, like Joseph Cotton’s delusional patriarchs in ‘The Tramplers’ (1965) and ‘The Hellbenders’ (1966). Their world-view is not multicultural. All-powerful and sadistic, Ferguson keeps his wife Edith (Mirella Maravidi) in a padded cell and he also uses his Mexican servant (Luisa Baratto) as a live target – she holds a candelabra aloft – in his wine cellar shooting gallery. Ferguson’s views are rants against the Reconstruction Era: slaves were ‘looked after’ by their Southern masters, while the North exploited them with a minimum wage, and the Mexican farmers ‘don’t deserve’ to own land. ‘Requiescant’ ends with imagery (of the revolutionaries riding away to their next battle, while others work the land as farmers) that could have appeared in any socio-political agrarian Italian film and resembles rural neorealism. Here the western setting is simply a vehicle for the discussion of wider issues. This is a far cry from ‘The Hill’s Run Red’, a Dino De Laurentiis production released internationally by United Artists and a much more straightforward (and commercially successful) revenge film. Lizzani directed ‘Hills’ as a favour to De Laurentiis, but used the pseudonym ‘Lee W. Beaver’. ‘Requiescant’ is obviously a more personal project for Lizzani, who made a series of highly political films about Italy. Along with the appearance of director Pasolini in ‘Requiescant’, Pasolini’s regular actors Franco Citti and Ninetto Davoli appeared: the former as two-fingered badman Burt (who is particularly fond of his blond toy doll) and the latter as Niño, a Mexican trumpeter. Their presence – a conspicuously Italian presence – creates a rather strange atmosphere which might be termed ‘Prairie Pasolini’.

Arrow Films’ visual presentation of the film boasts very good image quality and sound. It’s a brand new 2K restoration from the original camera negative, in both high-definition Blu-ray (1080p) and Standard Definition DVD editions. The film is presented for widescreen TV’s in the aspect ratio 1.85:1.

Extras include a rare Italian trailer for the film, a booklet essay by Pasquale Iannone, an archive interview with Carlo Lizzani in Italian with English subtitles, where he talks about his film career, and an interview with Lou Castel in French subtitled in English; both interviews are very enlightening. The big draw for me is Arrow’s inclusion of the Italian language soundtrack for the film, in addition to the English language version. The English dubbing is unremarkable, but ‘Requiescant’ plays very well in its original Italian – as in the case of ‘Face to Face’ and ‘Django’ the Italian dialogue track and script is probably the best way to enjoy this distinctly Italian western.